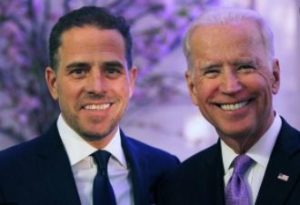 President-elect Joe Biden’s second son Hunter Biden involved himself in several relationship scandals. And among many of his infamous relationships, surfaced his relationship with a stripper, Lunden Alexis Roberts.

Lunden gave birth to the “illegitimate” child of Hunter Biden, Navy Joan in 2018. So, what do we know about Joe Biden’s grandchild?

Scroll down as the wiki-article unfold details on her.

Navy Joan Roberts is the love child of Joe Biden’s son Hunter Biden and his short-lived affair with a stripper named Lunden Roberts. She was born in August 2018 and has been kept as a secret away from public attention to have discussions about.

It was only when Navy Joan’s aunt Randi Joan went on Facebook to wish her a birthday, people knew about her. After Joe Biden won the 2020 US Presidential election, he was accompanied by his wife Jill Biden, son Hunter Biden and his wife Melissa Cohen, and his grandchildren except one.

And that child was none other than 2-year-old Navy Joan Roberts, Joe Biden’s “illegitimate” grandchild.

Hailing from Batesville, Arkansas-native Lunden Alexis Roberts is the mother of Hunter Biden’s child Navy Joan Roberts. She is born to her mother Kimberly Roberts and her father Will L Roberts. Besides names, no further information about Lunden’s parents surfaced in the public domain.

Moreover, Lunden grew up with her sister Randi Jo Frisby in their hometown. In fact, the Roberts sisters got even closer after Lunden welcomed her beloved baby daughter.

Talking about her job, Lunden worked as a stripper at The Mpire Club.

About Her Father, Hunter Biden

Not many details are necessary to know about Hunter Biden as everyone knows his sex scandals and controversies. As of 2020, he is best known as the son of the 46th president-elect of the United States.

He married Kathleen Biden in 1993. However, their relationship ended after three kids (more on that later), and staying married for 24 years. As for the divorce papers Kathleen filed against Hunter Biden, he spent all of the family saving on prostitutes and drugs.

How Did Her Parents Meet?

There isn’t much that has been shared on Hunter and Lunden’s relationship. Reportedly, the couple met in the same strip club where Lunden Roberts worked as Dallas, her stripper name in 2016.

The couple hooked-up and which led to Lunden’s unplanned pregnancy. A year after giving birth to her child, Lunden struck a deal with Robert Biden to keep the payment coming on their way if they wanted her to keep her lips sealed.

Surprisingly, Hunter never met his illegitimate child as the child lived in a remote region with her mother. He agreed to pay the child support on the first of each month.

Previously, Hunter didn’t agree with him being a father to the Navy but the DNA test proved him wrong. The specified amount which he paid to the child and her mother remains a mystery, but he also agreed to made additional pay due since November of 2018.

Does Navy Joan Have Siblings?

Now for the question: Does Navy Joan have siblings? Well, her mother, Lunden isn’t married and doesn’t have any other kids of her own.

But as for her father Hunter Biden, he is the father of four kids making them the half-siblings of Navy Joan.

Naomi Biden, the first child of Hunter Biden and his first wife Kathleen Biden was born in December of 1993. She earned her undergraduate degree from the University of Pennsylvania and graduated in 2016.

And then comes, Finnegan Biden, the second child of Hunter Biden and his first wife. She was born in 2000. Unlike Naomi who has her public social media account, she doesn’t own one.

As of this writing, Finnegan is a junior at the University of Pennsylvania.

And finally Maisy Biden, the youngest daughter of Hunter Biden. In March of 2020, Hunter’s second wife Melissa Cohen gave birth to their son. In June 2020, Joe and Melissa with their son went on a hike in Los Angeles.

Does Navy Joan Have Safety Protection?

As The Sun reported, the court granted Navy Joan and Lunden Roberts with special protection just like other members of the Biden family. Navy and Lunden count as the members of the President-elect’s family giving them the same privilege. However, one of the sheriffs from the town where Lunden lives noted that he isn’t aware of any extra security requirements or orders.

Additionally, it is still a mystery whether the secret service or other law enforcement agency will be providing security.

As the document submitted to the court by Lunden Roberts’s attorney showed that the Navy has been referred to as Baby Doe. And the paternal side of Navy Joan could actually put the mother-daughter and other family members at risk they are entitled to safety protection.