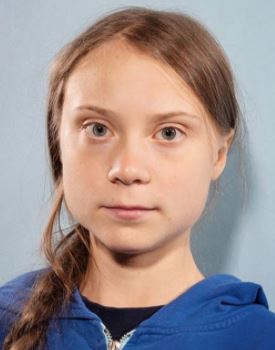 Do u remember Greta Thunberg, the girl from 2018 who protested in front of the Swedish parliament building? Her protests went so viral on social media that other strikes started around the world and the hashtag #FridaysForFuture was born.

Fast forward to 2 years from then, on Nov 13, 2020, a new documentary I AM GRETA aired on Hulu featuring the child activist, Greta Thunberg. Director of the show, Nathan Grossman revealed he started filming Greta as soon as she began her school strike for climate change.

Divulge into the world of Greta Thunberg over this wiki-style article.

From Stockholm, Sweden, Greta Thunberg is a climate change activist. She was born on January 3, 2003; that made her 17 years of age in 2020.

It was the summer of 2018 when Greta started getting attention as the girl protesting outside the Swedish parliament every Friday being a part of climate strike. And later, on September 20, 2019, she led the largest “climate strike” there had ever been and a few days later she addressed the United Nations, US Congress, and the UK Parliament at the UN summit with two of her youth colleagues.

Despite having Asperger’s syndrome, Greta was able to become the face of climate change in just 18 months. She shared that wouldn’t have become such a passionate activist if it wasn’t for her Asperger’s.

Trivia: Greta won a climate change essay competition in a local newspaper in May 2018.

Who Are Greta Thunberg Parents?

Not every parent is supportive of their children’s choices. And the same was the case with Greta Thunberg.

Her father, Svante Thunberg who is an actor, was initially unhappy about his daughter’s decision to skip school and join the movement. He shared that he “wasn’t supportive” of her. Although she was much happier after becoming an activist, he worried about the “hate” she might face.

Furthermore, he justified his point by shedding light on how Greta was in depression for “three or four years” before the strike — “she refused to eat, stopped taking, and stopped going to school.”

Also, he expressed his dismay at how Greta faced abuse from people who “don’t want to change” their lifestyles to save the environment. According to Greta, she was generally abused for her “looks, clothes, behavior and differences.”

As for Greta’s mother, Malena Ernman is an opera singer who studied music at the Royal College of Music in Stockholm. She wrote about her family in a book called Scenes From The Heart, published in August 2018.

The parents supported Greta’s vision. They admitted to turning green, not for the love of the environment but their daughter; Svante turned vegan and Ernman stopped flying. It seems that the first person Greta influenced was her family.

Does Greta Thunberg Have Siblings?

Yes, Greta Thunberg has a sister.

Like Greta, her sister Beata also posses a “superpower” (as her mother liked to call it). She suffered from attention deficit hyperactivity disorder (ADHD).

Greta Thunberg was still in high school in 2020.

She took a year off to campaign for climate change in 2019 and shared that she returned to school in 2020. Over Instagram August 2020, she uploaded a picture of herself with a schoolbag and cycle and wrote.

“My gap year from school is over, and it feels so great to finally be back in school again!”

Although it wasn’t clear which school she attended. She might soon graduate and move on to college.

What Is Greta Thunberg Net Worth?

In the year she took a break from school, Greta did a lot of things from addressing the UN climate conference to writing the #1 New York Times bestseller book. Yes, if u didn’t know about it, she sold her book over amazon titled “No One Is Too Small to Make a Difference.” The book was sold for $6.99 for a kindle.

To honor her achievement, Time magazine named her the person of the year in Dec 2019.

Also, Greta was nominated for the 2019 Nobel Peace Prize, after she spearheaded a global movement imploring world leaders to turn their attention towards climate change.

Greta wanted big governments and businesses around the world to act quickly and cut carbon emissions. Moreover, she pleaded banks, firms, and governments to stop investing in fossil fuels; such as oil, coal, and gas.

You may like – Alexa Paulay-Simmons Wiki: Age, Boyfriend, Family, Height

Who Is Greta Thunberg Boyfriend?

As of November 2020, Greta Thunberg didn’t seem to be dating anyone. Information on her boyfriend was unavailable.

Just returning to school from her exhibitions, Greta might be looking for someone who cared about the environment. Her boyfriend is sure to be a person who resonated with her activism.

Before you leave – Lorraine Bracco Boyfriend, Husbands, Net Worth, Kids