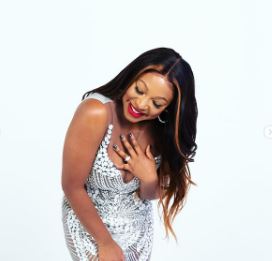 Naturi Naughton is a Black queen with multitudes of talents. She gained recognition for the TV show Power where she plays Tasha St. Patrick. In December 2020, just a few days before Christmas, she and her mystery-beau committed to a betrothal ceremony which her mystery man pre-planned to surprise her.

So, who is Naturi Naughton’s mystery fiance who she refers to on Instagram as Man with a Plan? Well, that revelation remains due on that part. But for now, delve into this wiki that gives the readers into the life, career, and engagement details.

Naturi Naughton turned 36 years old while celebrating her birthday on 20 May 2020. She was born to her father Ezra Naughton and mother Brenda Naughton.

In an interview with LADYGUNN, Naturi told that her parents stayed happily married for 49 years as of this writing and still growing strong. Talking about their job, Brenda worked as a part-time paralegal, whereas, Ezra is a retired accountant.

More on her family, she grew up with an older brother who is 13 years older than her. Plus Naturi lived in a happy family sharing love and support.

Talking about Naturi’s appearance, Nautri stands tall at a height of 5 feet (1.52 meters).

Naturi attended Catholic School growing up in New Jersey, East Orange. To start her career, Naturi joined a church choir where she practiced singing. She gave her first solo performance at the age of five and there was no stopping her from thereon.

Along with music, Nautri also seriously pursued a career as an actress. Her career in theatre helped her hone the acting skills she required to dominate the entertainment industry.

Naturi started her professional music career as a member of 3LW. The group debuted their single No More (Baby I’Ma Do Right) in 2000. After that, they released their debut album 3LW that went on to do platinum while selling 1.3 million copies in the U.S.

Naturi also toured with Destiny’s Child which is one of the highlights of her music career.

On the other hand, Naturi played the role of Little Inez in Broadway musical Hairspray. She is also best recognized for playing Lil Kim in a biopic of Brooklyn rapper The Notorious B.I.G.

Given that Naturi Naughton is widely recognized as a member of 3LW and her prominence as an actress, she surely makes an impressive salary. Plus in Power, she is a lead character, Tasha St. Patrick, one of the regulars up to season six.

Though the exact salary per episode is yet to come out, some entertainment news portal assumed Naturi Naughton made $150 thousand after season three of the show. Meanwhile, her net worth surpassed $800 thousand.

Naturi Naughton was once in a relationship with the one Ben. They stayed committed to each other for quite a while. The Power actress also had a daughter named Zuri from her relationship with her baby father. However, in 2019, Naturi called it quits with Ben.

They had everything going as planned for each other from baby to committed relationship. But Naturi and her baby father, Ben decided to move on to their separate ways of removing marriage off of the table.

“I don’t want to be married if it’s not the right marriage and the right person.”

However, the parents of Zuri has agreed upon co-parenting so that the change in their relationship doesn’t affect their child.

Who Is Naturi Naughton Fiance?

Naturi Naughton was off the dating market after she announced her engagement with her mystery boyfriend in 2021. While most celebrities rush on to show off their fiance on social media, Nautri did the opposite by hiding him in the backdrop of the show.

However, he gave an exclusive story tour to Essence regarding her engagement which she shared on her bio as of this writing. As Naturi told the Essence she wasn’t quite ready to introduce her beau to the world.

A few days before Christmas, what Naturi believed was her princess-themed photo shoot turned into an engagement proposal when her fiance got on his knees. The mystery man proposed to her in front of her parents, one of her best friends, and the Disney crew walking in with Mickey and Minnie.

Naturi’s fiance presented a Zuri ring with her birthstone (Ruby). She never believed the day would come because of the bruises she had from past relationships.

As for how they met, Naturi shows gratitude towards her TV husband, Omari Hardwick, for introducing her to her future husband. She shared a series of photographs from the day of her engagement and but none of them revealed the identity of the mystery man.