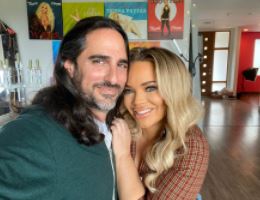 If you remember, Trisha Paytas came out as transgender, claimed to have dissociative identity disorder, and even held her own fake wedding, all within 2020. Also, she reportedly started dating Moses Hacmon in March the same year, but as a prank.

So, what became of them? Did they start dating for real? Stay till the end to learn all about the duo and on the way, get to know Moses and his net worth.

Oldest of the four siblings, Moses Hacmon shared all of his two brothers and sister were also an artist.

His sister, Hila Klein was the co-host of the h3h3Productions YouTube channel, and the wife of online entertainer, Ethan Klein. Also, she is a painter who sold her works over the internet.

Furthermore, Hila was the second of Moses’s siblings who move to the U.S. even though their parents were against it.

Trivia: Moses moved from Israel to Los Angeles in 2002.

One of Moses’s brother lived in New York and was doing his Masters in arts.

Also, Moses’s other brother, Zac Hacmon was an architect who sculptured unique designs and had an exhibition, “Dispositif,” on view at Slag Gallery in New York, through October 18, 2020.

As for Moses’s parents, his mother’s name was Ilana Hakmon while his father remained anonymous.

He is a handsome man who had a striking resemblance to Lord, Jesus Christ. Also, props to that he was scouted by National Geographic and was the lead for The missing years of Jesus.

But portraying “Jesus” wasn’t the only role he got in the entertainment industry. He played as Tom in Through the Promised Land (2010).

Also, he had a self-titled Youtube channel with 1.05K followers.

What Is Moses Hacmon Net Worth?

But unlike Trisha, Moses’s earning can be mostly credited to his job as an Architect. With very few movies that he appeared in, we believe that his earnings as an actor played a little significance to his total assets.

He defined his “practice” as “part art, part science, and part personal spiritual journey.” His style of architecture is derived from “the constant creation of physical objects that represent the spirit of the present time and space.”

Apart from this, Moses was once in the Air Force too. In Israel, there was a mandatory service in which very few people get accepted. He shared that he did not want to join the Air Force but since everyone thought he couldn’t, he joined to prove everyone wrong.

He spent a year and a half in the flight school and left the military after three years. It was only after then, he ventured into the art industry.

In light of his education, Moses studied cinematography and fine art at the Avni Institute of Art and Design in Tel-Aviv. Also, he achieved his B.Arch with the AIA honors award from Southern California Institute of Architecture in 2006.

Later, he joined Body Weather Laboratory to trained in movement and dance. Moreover, spent ten years studying Water’s composition, properties, and movement. He was part of the Once Upon Water project and also ran a site called “Faces of Water”.

Though Trisha Paytas might have started dating Moses Hacmon just to mess with the Kleins, Trisha fell for Moses, for real.

When they first started going out, Moses’s sister and her husband (Hila and Ethan) weren’t happy about it. Plus, the Kleins’ discontent, eventually led the duo to break up multiple times.

However, Moses and Trisha got back together and in 2020, they seemed happier than ever. The couple seemed to be serious about each other. So, was engagement and wedding next?

Indeed, they got engaged in December 2020. Moses took to Instagram and shared several photos from their proposal. For her part, Trisha also uploaded the same images and captioned it— “WE’RE ENGAGED!!!!!!!! 💍 Ima be a wifeyyyyy 😭 future Mrs @moses_hacmon 👰🏼 MERRY CHRISTMAS 🎁 WE DID IT 👏🏻”