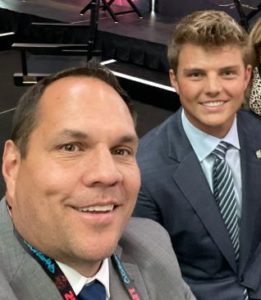 When Zach Wilson was picked by New York Jets at the 2021 NFL Draft, his upbringing was the focus of the lover of football. Moreover, his parents became the center of focus after the draft. Along with Lisa Wilson, Zach Wilson’s mom, fans also sought details about his father Mike Wilson.

So, delve into this Mike Wilson Wiki to learn more about Zach Wilson’s father!

Along with age, Mike’s birthday and zodiac are yet to be unraveled.

Born to an alcoholic father and workaholic mother, Mike had very little to share about his parents. At the age when Mike was 1, his parents moved to Honolulu, Hawaii, which Mike cited as his hometown.

But the only thing that we know is, his parents separated when he was a young boy. Furthermore, Mike maintained almost no relationship with his estranged father. After separation, his mother drowned herself in work to support the family of four.

Sadly, Mike’s mother was barely able to manage to provide for the family. The family struggled financially even when Mike was in his teen. At the age of 17, he couldn’t afford to get a driving license as his mother couldn’t pay for it. This is why Mike was found riding a bike or getting a bus to get around Oahu.

Talking about his siblings, Mike had two younger sisters. While one of his sisters passed away when she was 9 because of a brain tumor. He also cared for his youngest sister while doing all the household chores.

Mike Wilson’s hunky physique and a height of 6 feet 3 inches (1.90 meters) made him a formidable player in the Utah Valley University during his time as an athlete. At the time, he weighed almost 130 kilograms (288 lbs) which have increased by at least another 30 pounds as of this writing.

Unlike Zach and Lisa Wilson, Mike Wilson is not actively involved in social media. His Instagram account earned him 44 followers but he made not a single post on the platform. In the same way, he was also on Twitter with 2173 followers as of May 2021. But, unlike IG, he tweeted 1483 times on the platform.

Moreover, Mike was also on Facebook where he hadn’t been active since January of 2010.

After graduating high school at the age of 17 from McKinley High School based in Hawaii, Mike Wilson decided to pursue his college degree. After that, he joined college where he studied sociology at the University of Utah.

While in college, Mike played as a defensive lineman from 1993 to 1994. Talking about his time in football and his legacy, he once tweeted:

“25 yrs ago I played in my first rivalry game for Utah. We had been dominated by BYU for years. We wanted to beat them so bad. And we did. 34-31. 25 years later, my boy @zachkapono has the opportunity with his team to end the 7 year losing streak and start a new winning tradition.”

Mike had plans to return to his hometown but he met his now-wife and everything changed for the two forever. He decided to stay in Utah.

But presented with an option whether to become a fireman or start a job, Mike couldn’t make the proper decision. While the fireman provided a steady income to support his wife and the potential kids, owning a business would provide him freedom.

Mike put trust in himself and decided to own a business. The Neeleman family, who had previously owned a mini-mart, had hired Mike as an employee when he was a student. He bought the store from the Neeleman family.

Then success in his first business opened doors for Mike’s next businesses including gas stations and convenience stores. His businesses also included laundromat and pursued a career as an entrepreneur.

From a boy who couldn’t pay for his driving license, to a man owning multiple businesses who had a net worth of an estimated $5 million, Mike Wilson came a long way.

As already established, Mike and Lisa Wilson went attended the same college. There, he met his future wife, Lisa.

Mike and Lisa Wilson married on 8 March 1997. However, the background behind the first meeting and their love story as a whole remains a mystery. The married couple went on to have six kids in total; Micah Wilson, Issac Wilson, Kiana Wilson, Zach Wilson, and two unnamed kids, a son, and a daughter.

In March 2021, Lisa celebrated her 24th marriage anniversary. She posted a video with a snap from the day of their wedding. She gushed how her husband is the only man she wants to be with and how he gives him butterflies every time he walked in the room. 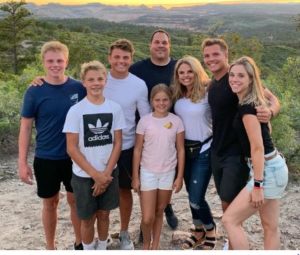 Mike Wilson with his wife and six kids in 2020 (Pic: Lisa’s Facebook)

Talking about his wife Lisa Wilson, she is a lady of many talents. She is an entrepreneur, fitness instructor, intuitive cook, relationship counselor, and aspiring motivator. She was trending on Twitter after Zach Wilson made it to the 2021 NFL Draft.