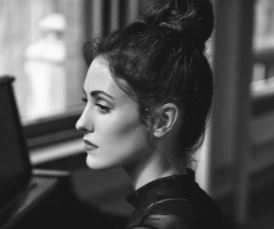 After famously bedding over 4,000 women, Mick Jagger finally caught feelings for a ballet dancer named, Melanie Hamrick. And it seemed like Mick was all in for her!

In Dec 2020, Mick enchanted Melanie by buying her a $1.98 million house located between Sarasota and Bradenton, Florida. The grand Mediterranean-style house, situated in a “quiet and private” area, would certainly be an escape for the lovebirds away from all the bustle.

So, who is this lady, able to “tame” the infamous womanizer Mick Jagger? Learn all about her as this wiki continues.

As per her birthday, Melanie is of the Cancer zodiac.

Born and raised in Williamsburg, Virginia, Melanie Hamrick grew up in a family of five. She has two younger siblings named Chris and Rachel. As for her parents, they are John and Anne Hamrick.

Her father, John worked as an engineering firm director, while her mother Anne stayed home. Unfortunately, John passed away in 2015 after losing the battle to Cancer.

Melanie often took it to her social media to share that she missed her dad. On Nov 21, 2015 (her dad’s birthday), Melanie uploaded a picture of him on Facebook and wrote,

“My heart breaks every day with out him (love emoji) He smiled everyday no matter the pain.. My Hero.”

Melanie Hamrick’s net worth was over $2 million in 2020. Likewise, her boyfriend Mick Jagger flaunted $500 million net worth then.

This was how Melanie defined herself. She is a professional ballet dancer who started her career joining the School of American Ballet.  In April 2004, she joined the ‘corps de ballet’; a group from the school, and received her first dance contract at the age of 18.

Since then, Melanie has performed several ballets including Sylvia, The Sleeping Beauty, Romeo and Juliet, and Lady of the Camellias. Also, she landed a leading role in Dark Elegies.

Now, Melanie Hamrick retired from ‘corps de ballet’ after 15 years and enjoys her job working mostly as a choreographer and a dance coach.

In light of her education, Melanie attended Saint Mary’s College of California.

Melanie Hamrick & Mick Jagger: Married, Son, How Did They Meet?

Reportedly, after the show, several ballerinas were invited backstage to meet the band, that Mick was a part of. That’s how the story of the two began.

Dating each other for a few years, Melanie got pregnant with Mick’s baby in 2016 and they welcomed their son named Deveraux Octavian Basil Jagger on Dec 9 that year. It was also Deveraux’s birth, Melanie realized that she was struggling with her job. Thus, she chose to retire from the ‘corps de ballet’. She said,

“It’s hard when you have a child and the life I have now. I feel like superwoman some days, and other days I feel like I’m head above water just phoning in being a dancer.”

Melanie’s kid is a talented child like his parents. Though he was only 4 years old in 2020, Deveraux played the ukulele and sang. Also, he loved music classes and being onstage. Guess we’ll be seeing him in the lights when he grows up.

As of 2020, Melanie and Mick had yet to tie the knot. However, both of their friends already considered them married.

Did u know: Before Mick, Melanie was engaged to a classical Cuban dancer named José Manuel Carreño. Reportedly, José bent the knee in May 2011. Also, they had planned their wedding on March 15, 2013, but unfortunately, the duo broke up before that.