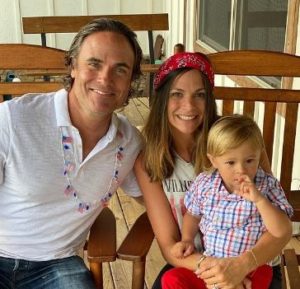 Matt Blashaw is a man with many talents working as a real estate agent, contractor, and reality star. Moreover, he is one of the biggest reality stars coming from HGTV for his skills in making viewers stick to their TV sets.

Delve in as this wiki unfolds details on the life, romance, marriage, and career of Matt Blashaw.

In November 2020, Matt Blashaw celebrated his 45th birthday. He celebrates his birthday every year on 6 November.

Moreover, Matt Blashaw secured Scorpio as his zodiac sign and embraced character traits such as honest, ambition, jealousy, and secretive among a few others.

Matt Blashaw was born to his parents Lawrence Blashaw and Deborah Klee Blashaw in his hometown of Long Beach, California. His father was an engineer but worked as an export packer and owned a lumber yard. His mother actively participated in charity work. Her theater stint includes acting in the production of The Emperor’s New Clothes performed at the Gallery Theatre in Anaheim.

More on other family members: Matt’s grandfather Lawrence Blashaw Sr., was in the Battle of Bulge during World War II. The military man went on to meet his wife, Nita, in England.

Sadly, his grandfather breathed his last in 2017.

Matt Blashaw stands at a height of 5 feet 6 inches (1.67 meters) a below-average height for an American. Likewise, he weighed about 71 kilograms (156 lbs) at the time of this writing.

Moreover, Matt Blashaw’s receding hairline, dimples on his cheeks, and short thorny beard are some of his distinct features.

Talking about Matt’s social media reach, he accumulated quite an impressive number of followers on social media. His Instagram account earned him a total of 20.5k followers in total.

Likewise, his Twitter account gathered 16.3k followers as of the time of penning this piece. In the same way, he is also on Facebook with 12.9k followers in total.

Following high school graduation, Matt attended Chapman University. While there he studied Film/Cinema/Videos Studies and earned his bachelor’s degree in the same.

Matt started working at the Disneyland Resort as a technical service in 2001. Then he founded his own company named Blashaw Construction Inc. in orange county and focused all of his time there.

The reality star went on to work for RIVR Media where he served less than a year as a talent. From 2007-2009, he started his job at Century 21® as a real estate agent.

In 2007, Matt joined Scripps Networks Interactive as a TV Host/Contractor/Realtor where he started working in HGTV and DIY Network.

In 2016, Matt started working for Berkshire Hathaway Homeservices California Properties as a real estate agent. He also added his job in McMonigle Group on his resume where he worked as Senior Associate.

But his two decades’ worth of work as a licensed contractor is what gave him wider recognition. Since Matt grew up in a lumberyard, it paved the way for him to garner fame as a reality star.

Matt Blashaw is married to his wife, Lindsay Archer.

Career-wise, Lindsay Archer is a landscape architect and expert in container gardening from Kansas City. And this is exactly how Matt Blashaw met her. As Yard Crasher followed one of her client’s home renovation, Lindsay was let with no choice but to make a few appearances on the show.

The couple grew closer together during these sessions. Eventually, with a little help from the project’s contractor, they went on their first date.

Though their relationship endured long-distance, they eventually ended up engaged.

In 2017, Matt and Lindsay tied knots making them man and wife at the wedding. A year later, in July of 2018, the married couple welcomed their first-born Jace William Blashaw.

Previously, Matt Blashaw married Teresa Bradshaw. He and his first wife stayed happily married until an unforeseeable divorce which caused them to part ways.

No information on their divorce surfaced as of this writing. As her photos suggested, she is a beautiful blonde lady.

During their time together, Matt shared very little information on his first wife. Additionally, the divorce of the two caught very little attention from the media.

But as Matt uttered in several interviews, Teresa was the one who inspired him to delve into a reality show. She motivated him to join DIY’s Stud Finder competition as she thought it was right up his alley.