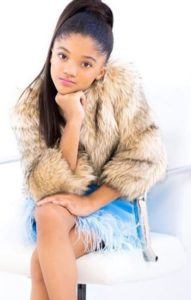 Mariah Bozeman is a young actress/model best known for being cast on the Joe Wright 2020 movie The Woman in the Window starring Oscar nominee Amy Adams.

Besides her career as a film actress, she also appeared in several TV commercials.

Delve into the wiki-style article of Mariah Bozeman as it unfolds professional and personal details on the young actress.

Mariah Bozeman turned twelve years old on 24 February 2020 while celebrating her birthday. She is Chicago, Illinois native who lives with her biological parents.

Being a daddy’s girl, she never hesitated to showcase her love to her father, Brad Bozeman. Whereas, her mother, Dana Bozeman, a doctoral candidate attending the University of Chicago, was the biggest inspiration and support to follow her dreams.

Mariah is a younger sibling to Amirah Bozeman, who was born on 5th April 2006.

Mariah’s love for acting and modeling started early on.

With her overloaded cuteness, she was approached for several local and national TV commercials.

On 16 January 2018, Mariah shared her joy of being in Humira commercial, breaking the news on her Instagram account. Humira is a brand that sells Adalimumab, a medication for Crohn’s disease. Other than that, she also made an appearance in Oscar Mayer Deli Fresh commercial.

As for her career in TV shows and movies, she did an open casting call for a director’s website. Her God-Father, who was signed to Stewart Talent Agency (STA), sent the clip of the Humira commercial and few pictures of her to the talent agency.

One thing led to another and there she was, a young aspiring actress representing Stewart Talent Agency (STA).

Soon after Mariah’s link up with Stewart Talent Agency, she was announced to play Keisha Jones in an episode of NBC’s Chicago Med (2018). She landed a minor role in Lost & Found (2018).

Following that, she landed the role of Marie in the Jill Ross created web series Chi-Nanigans (2019). In addition to that, The Woman in the Window (2020) proved to be the breakthrough role of her budding career and a big-screen debut. She was cast to play Amy Adam’s daughter in the movie. 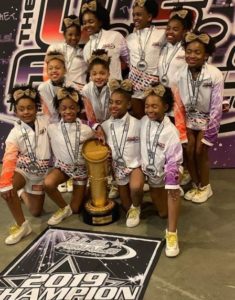 Mariah and her cheerleading team in The US Final in 2019 (Pic: Mariah Bozeman’s Instagram)

Besides her career as an actress, Mariah enrolled in a Chicago-based cheerleading program named Technique Gems.

Mac and Cheese is her favorite cheat food.

Her favorite travel destination is Hawaii.

Beyonce is her favorite singer.

In 2018, she was celebrated as a Black Girl Cheer champion.

She performed with her cheer-leading team in the Chicago Bulls pre-game on 26 January 2019. She was nominated as Black Girl Cheer’s ambassador in 2019.

She brand represented Be You apparel since 2018.

In her free time, she enjoys making TikTok. Her TikTok account is @ryah22308