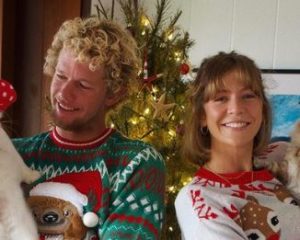 But luckily, John had a wonderful wife Lauryn Cribb to cheer him up at home. She had always been there for the olympian ever since he was an aspiring surfer.

Delve into the life of John’s wife as this Lauryn Cribb Wiki proceeds.

Corresponding to her birthday, Lauryn is of the Taurus zodiac.

Fun Fact: Lauryn moved to Hawaii on the very day of her birthday. So, the time zone difference made her birthday last for two days. (She celebrated on both days!)

Lauryn Cribb flaunts Australian nationality. She was born to parents, Leon and Sonya Cribb. Her father, Leon is a former registered nurse who worked at Lismore Base Hospital. Later, he moved to Aspen Medial Australia as an intensive care paramedic. Also, he went on to join Roy Hill Mine.

As for Lauryn’s siblings, she has at least one brother. One of them is named Matthew J Cribb. He resided in his hometown Mount Colah, New South Wales, Australia.

Overall, Lauryn’s family is very close to each other. They are often spotted together on different occasions and celebrations.

Most of her posts then flaunted her modeling pictures.

Lauryn Cribb is a professional model by profession. As of 2021, she was signed to The Honolulu City Club founded by Melanie Tjoeng.

But aside from her modeling job, Lauryn also sold womenswear online over “depop.com”. Her profile featured clothing items like one-pieces, bikinis, swimsuits, bags, and heels that ranged anywhere from $50 to $250.

Just in case you’re curious, a model in Hawaii reportedly made around $125 thousand per annum in 2021.

In light of her education, Lauryn graduated from Lindisfarne Anglican Grammar School Australia in 2011 and moved to Hawaii in 2015 to join the University of Hawaii at Manoa. She studied Horticulture there and graduated in 2020.

Lauryn Cribb and her husband John John Florence were together for a long time ever before they got engaged in 2019. As per John, although he kept his dating life private all of their friends and family knew that they were together.

So, how did he pop the question? Well, John “woke up one day” and felt like “okay “today’s the day.” However, he didn’t have an engagement ring with him at the time. But luckily, he had a perfect diamond ring that Lauryn found on a beach one day.

That afternoon, as Lauryn was dressed up and on her way to town, John asked her to go to a beach with him. It took some convincing, but Lauryn agreed and ditched her town plans.

As they hit the beach, Lauryn then asked if they should go to the water. Lauryn declined and asked her to stay and after 20+ minutes, John asked her to marry him.

John left for his trip to the Palmyra Atoll in the Line Islands days later.

In May 2021, the two then went on to hold a private wedding. The detail about which is yet to be shared.

Talking about their kids, Lauryn and John shared none before 2021. But they did share their plans about having one after moving close to their family. So, John hoped to get an Australian passport, and also wished for Lauryn to get a US one.

The first post ever on Lauryn’s IG of the couple was from August 2014. Since then, the two have sailed around the oceans together.