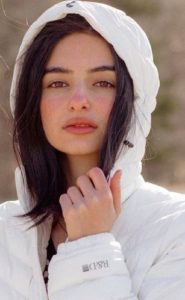 Lana Blakely is a YouTube influencer who gained major recognition within a short period. She left her high paying corporate job to be a creator and a learner. As such, the internet sensation chose YouTube as a platform to share her creativity.

Most of the content Lana created explored social and philosophical issues.

This wiki-style article brings you the life and professional details of the beloved YouTuber. Find out if Lana is dating or married!

Lana Blakely celebrated her 25th birthday on 1st February 2020. She spends most of her time in Stockholm, Sweden.

What’s more, she moved to Los Angeles, California in September 2016.

There exists almost little to no details regarding her parents. In her family, Lana has one sibling — her sister Jana.

Lana graduated from college with a degree in Business Studies. She also went to the University of California of Los Angeles for her further education. The famed internet personality holds two degrees in total that she had earned during her academic pursuit.

Before her career as a YouTuber, Lana Blakely worked 9 to 5 as a corporate employee. She divulged the information mentioned in her video How to Deal with Feeling Lost in Life.

In a section of that video, Lana had inserted a short clip of her at her work-place feeling miserable.

After Lana quit her job, she pursued her passion for photography.

The YouTuber noted she was nine years old when she got her first digital camera. She was thirteen when she had her first DSLR.

Lana started her self-titled YouTube channel on 18 December 2010. But it took her almost eight years to start pointing lenses on herself rather than pointing elsewhere.

Her first video was titled, Dear Sister, I messed up was uploaded in July 2018. A Real Day in the life of an Introvert was the most viewed video of her garnering +2 million views (as of early 2020).

As of February 2020, Lana has stacked over 174K+ subscribers on her channel.

With her career in social media is expanding intensely, Lana will surely see the pointer going upward on her net worth chart.

In her first video, Lana Blakely mentioned dating a boy she met at UCLA. She also added that the mystery beau made her very happy and made her laugh all the time.

Lana further noted that her sister would’ve been very happy meeting him if she could.

To everyone’s dismay, Lana kept details on her boyfriend very private and never made it clear if the romance was on-going or whether it saw its bitter end.

Later in January 2020, she uploaded a video titled I Dated for 10 years. Here’s What I Learned.

Given her secretive nature, the fans might have to wait for a long time to see Lana share wedding vows and get married.