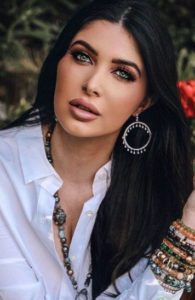 Scroll through this wiki-style article to get familiar with the profession and married life of Brittny Gastineau.

She turned 36 years old on 6 November 2019. There were no records of Brittny ever having any siblings.

Brittny’s parents, who already gained prominence in sports and entertainment, paved the way for her at an early age. But her parents got divorced on 21 June 1991 which affected her deeply.

Brittny stands at a moderated height of 5 feet 8 inches (1.74 m) with an attractive body.

Her career as an entertainer started when she got cast in ABC’s TV series The View (2005). In the same year, she also starred in Filthy Rich: Cattle Drive, The Big Idea with Donny Deutsch, and Gastineau Girls where she appeared on all 8 episodes in total.

Besides TV shows, she signed her first contract with Elite Modeling Management in the early 2000s.

Talking about her plastic surgery, allegedly she got a lip filler and Rhinoplasty on her face as per the experts.

Brittny enjoys a handsome net worth of $5 million, as of February 2020.

Brittny’s name was romantically attached to several personalities over the years.

She dated Jerry Ferrara in 2010. She was also rumored to be dating Olympic gold-medalist Michael Phelps and Latin superstar Luis Miguel in 2012.

In June of 2014, she was spotted at Beverly Hills with a black eye, cuts, and bruises on her face. Later, it was revealed that she and her once-husband prospect Marquis got into a fistfight that ended badly. She had to be hospitalized after she was beaten.

Soon after that, the relationship ended. Brittny’s well-wishers were glad that the two didn’t end up getting married.

In 2018, Brittny was spotted with Million Dollar Listing star, Steve Gold. The romantic relationship was initiated after they met in Basel Party hosted by a mutual friend. But the romantic bliss ended short.

Appearing on the E! series “WAGS,” Natalie Halcro rose to the national limelight. However, The...