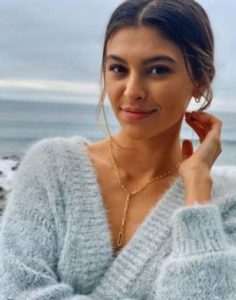 While on professional grounds, she has performed with the likes of Demi Lovato, Little Big Town, and more.

To know more about the up-and-coming artist and the extent of her romance with Good Luck Chuck star, stay in the writing, till the end.

Kelsi Taylor was born to her parents in Nevada, a state in the Western United States.

She is the youngest of three children in her family. Her brother is 10 years older than her and her sister is 13 years older. Kelsi is very close to both of her siblings.

Wanting to pursue a career in music, Kelsi left her hometown for California when she was only twelve.

Later it was reported, Kelsey actually took a break from college to focus on her music career, but it also said, she intends to finish school sometime later.

Kelsey Taylor grew up celebrating her birthday every year on 26th October. So, one can say her zodiac sign is Scorpio.

Kelsi’s page on Facebook describes her music as Indie/Alternative/Soul but she told a fan on Instagram that she would categorize it again as “singer-songwriter/indie-pop with a touch of folk.”

One of her famous achievements as a musician, thus far, was when she sang backup for Demi Lovato during the iHeartRadio Jingle Ball concert in November American Music Awards in 2017.

Meanwhile, her IMBD page also portrays her as an actor. It claimed Kelsi appeared in short films like Kelsi Shadows, The Funny Bunch, and Alchemy. Although, at the moment it was not apparent if she also did any movies or TV shows.

As for her musical legacy, Kelsi released an EP titled Fear For Yourself in 2018. Also, Love Games, Longing, and Fall In Love were some songs that earned her buzz.

To mention her net worth, Kelsi Taylor summoned around $300 thousand fortune.

On Instagram, with 33.8k followers (until 27th August 2020), she describes herself as a fitness instructor offering Instagram live workouts.

Indeed, her social media albums are dominated by her workout pictures or the ones where she flaunts her shape either in skin-tight sport attires or in fashionable bikini and beach outfits.

Further, on Facebook, more than 1.5K people kept a tab on her profile on a regular basis.

She also ran a self-titled YouTube channel, with 1.23K subscribers, where she mostly showcased her musical talents.

The day, 6th of May 2019, marked Kelsi Taylor and Dane Cook’s second year of anniversary. A year later, and they were still going strong. 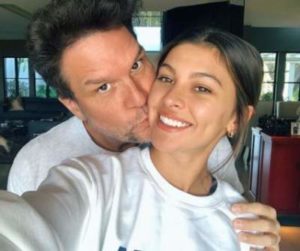 They are aware of the raised eyebrows towards their “unconventional” relationship. Even so, they have been openly gushing about their romance, their undying feelings for one another.

Dane even made a healthy-humor about their age-gap while on Jimmy Kimmel Live!. Dane said:

“Sometimes I actually find myself saying, ‘Where has she been all my life?… And then I realize she wasn’t alive for the first 26 years of it.”

This and a few more jokes were made in regards. But, he also said some really adorable things about his young beau.

He told Jimmy Kimmel that Kelsi is “the kindest, sweetest” and his “favorite best friend” and also how much he loved her.

Kelsi met Dane at a game night he hosted at his home. After staying friends “for a while”, they soon “fell in like with each [other]” which eventually upgraded to love. They began dating probably as of 2017’s May.

According to a fan conversation over Reddit, seven months before this writing, Kelsi Taylor appeared in multiple online pictures with voice actor, Zach Callison from around 2015.

Further, it said, Zach, who is known for his works on Steven Universe, Sofia the First, and The Legend of Korra, has liked her old pictures on Instagram. The last picture he liked, being the last one she posted on July 31, 2015. All, this informer wished to prove was if the albums Kelsi and Zach released, separately, around the corner were about one another.

Whatever may have happened, it all now seems to be in the past, because Kelsi appeared to have already found her happily-ever-after in someone else.

Francesca Hayward gained a wide range of recognition when she became a principal ballerina in 2016. Besides...

In mid-December 2019, Austin Wilson became a single man after separating from a girlfriend of a month Demi...