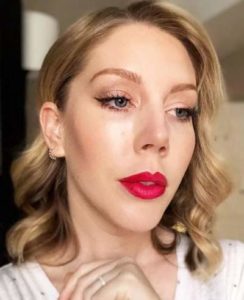 Katherine (Louisa) Ryan is a Canadian comedian, writer, presenter, and actress based in the United Kingdom.

She is known for appearances on many British panel shows including as a team captain on 8 Out of 10 Cats and guest appearances on Never Mind the Buzzcocks, A League of Their Own, Mock the Week, Would I Lie to You? amongst others.

In 2015, she made headlines, replacing Steve Jones as the presenter of Hair on BBC Two.

In September of 2020, Katherine was to hit Netflix’s screen for the third time after live stand-up specials Katherine Ryan: In Trouble and Katherine Ryan: Glitter Room, in the previous years.

Her third Netflix project, The Duchess, a six-episode show is loosely based on her own life. She plays a melodramatic single mother, living in London with a great sense of style, a unique relationship with her daughter, and a deep fear of commitment. Not to mention, Katherine also wrote the series and served as one of its executive producers.

This being a brief look into her career, now tune in to the writing below— which is more on her personal life.

Katherine Ryan, now standing tall at the height of 5 feet and 6 inches (1.68 meters), grew up alongside her two younger siblings Kerrie Ryan and Joanne Ryan.

Katherine Ryan, however, chose an entirely different career path; now providing her with a net worth of $4 million (per 2019’s reports).

The Campus star has a daughter, Violet (age 11, as of late-August 2020) from her first marriage. Last heard, she lived in Crouch End, London, with her only daughter. For some reason, she never mentioned the whereabouts of the father of her baby.

In 2019, Ryan entered into a civil partnership with Bobby Kootstra. The ceremony took place in Denmark in the presence of her daughter. Katherine and Bobby had dated in Canada as teenagers and were reunited when she returned to her hometown while filming an episode of the Who Do You Think You Are?.

Katherine Ryan Before & After Plastic Surgery

Katherine Ryan who used to be bullied for being different when she was younger, is now considered the apotheosis of sassiness for many reasons. For one, she openly talks about her fondness for cosmetic surgery.

She admitted to having had filler in her lips, jawline, and chin. “If everyone was transparent [about it] there would be a lot less fuss”— she said.

According to the latest reports from Wikipedia, she had a breast augmentation in her early twenties and then a second augmentation after a relationship of hers ended. About the time, she said:

“There was something about that relationship that made me feel dirty and I thought I’d put him and the boobs in the same bin. It was the ultimate cleansing ritual.”

Also, on the brighter side, the surgery boosted her confidence; to the extent that she competed in the annual Hooters bikini pageant — and won the title ‘Miss Hooters Toronto’.

Moving on, Katherine, without a second thought, credited her “great skin” to laser facials and painful ultrasound and needles she allowed in her face. “If you want to do those things, why not?”— said the Episodes actress.

Although given the chance to undo one thing from her younger days, she confessed she would want to avoid the time she got lips done in an amateur’s basement for cash.

Katherine stated that ever since the incident, she now regrets, her lips have always been wonky. From all these confessions, what she implied was for those interested in plastic surgery, to go to the right place and get the professionals to do it. 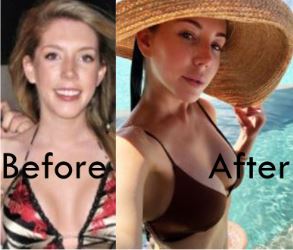 Katherine Ryan, Before & After surgery!

Followed by these admissions, people are dying to get a hold onto her before & after surgery pictures.

Sixteen years ago, from the time of this writing, Katherine Ryan was diagnosed with Stage 2 skin cancer. She, now, has a sizeable scar on her thigh where a chunk of flesh the size of a golf ball was removed. She considers it as a reminder, in fact, a sign of good fortune. Probably because the cancer was not that serious. Fortunately, it did not get into her lymph nodes and so she did not need chemotherapy, at the time.

Eventually, the ailment recurred, but again it was easily dealt with. Katherine said this time it felt like “a little smack on the arse of ‘Hey, wait a minute. Listen to your body, here.’ ”

So far, she faced two bouts of skin cancer.

In October 2014, Brittani Boren Leach launched her self-titled YouTube channel. By 2020, she had garnered...

0 Replies to “Katherine Ryan Before & After Surgery, Skin Cancer Story”