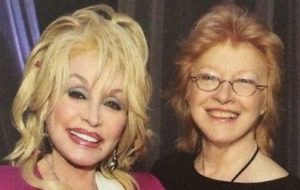 Judy Ogle is Dolly Parton’s best friend of over 64 years. She first came into the limelight after being mashed up in the gay rumors imposed upon Dolly.

In Dec 2020, having enough of the fan’s accusation, Dolly opened up in an interview with “The Sun” about her relationship with Judy. She strongly denied the claims saying, “­So ­people say that, because you can’t really have a great relationship with a woman. I’m not gay but I have so many gay friends and I accept everybody for who they are.”

So, who is Judy Ogle, when you put her apart from the rumors? Learn all about her personal life as this wiki proceeds.

As per her birthday, Judy is of Leo zodiac.

Dolly shared that Judy and she grew up together. This leads us to believe that Judy’s hometown is the same as that of Dolly’s, Sevierville, TN.

Talking about their childhood, Judy and Dolly were like family. Their parents knew each other and they even went to the same school. Dolly phrased their friendship as, “we were like ­sisters, became best friends.” Also, Judy was a “quiet person” while Dolly was “very outgoing”, so this made them “perfect friends”.

Seeing a friendship of over 6 decades, people who couldn’t fathom it began to talk. Or as Dolly said, “People love to talk. People love to gossip. They’ve said that about Oprah, but it’s not true.”

The duo often referred to each other as “girlfriend” or “sister” but it was just a BFF thing.

Trivia: Judy and Dolly once got in a car accident together in Nashville. It was 2013, when the Nissan, Dolly was driving got T-boned by Mitsubishi. Fortunately, no one was injured seriously.

Mentioning her distinct features, Judy wasn’t any less beautiful than her best friend Dolly Parton. She had red hair and often wore smaller “harry potter” glasses. Some fans mentioned her to have a similar resemblance with the singer, David Bowie as well.  One joked,

Judy Ogle had no social media presence as of 2020.

However, you can find Dolly over Instagram with over 4K followers and sometimes spot Judy over it. On June 6, 2017,  Dolly uploaded a picture of them to wish Judy, a “Happy National Best Friends Day”.

It looks like Dolly chose a career on the frontlines while Judy, given her “silent” personality, chose to work behind the curtains.

Amongst the many rumors that revolved around Dolly Parton, her relationship with Judy Ogle came on the top. However, Dolly claimed that the two were just friends and not lesbian lovers in 2020.

Also, a drag singer and comedian, Trixie Mattel reportedly composed the song “Red Side of the Moon” about “an average person named Judy watching their darling from behind the spotlight.” And Trixie simply chose the name “Judy” because at the time people were obsessed with the idea that Dolly was gay and in a relationship with her best friend Judy.

But Trixie herself confessed that she didn’t beloved the rumors.

As of Dec 2020, Judy Ogle didn’t open up about her husband or kids.

However, Dolly was a married woman then. She was married to Dean since 1966 and loved him dearly. Also, she just let the rumors regarding her sexuality slide by because it didn’t “hurt the people she loved.” She added,

Dolly and her husband were going strong as of 2020. She shared that he was a “good man, best buddy”,  “he’s crazy, he’s funny.” Though they weren’t in the same business, neither cared “about any of that.”