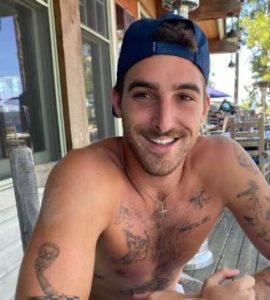 Once a famous social media influencer on YouTube and Instagram, she said she wasn’t able to talk about the incident before because of the legalities behind it. While both her parents began serving their prison sentences after pleading guilty in May, Olivia considered it the right time to own up to the family’s wrongdoing. Her parents had paid $500K in bribes to get both Olivia and her eldest sister Bella admitted to the University of Southern California as recruits for the crew team.

And while all this was happening all some of the fans could think about was how supportive Olivia’s beau had been of her amid the crisis. More glaringly, after Jackson Guthy shared a clip of the Red Table Talk on his Instagram Story writing, “Very proud of you!” along with three heart emojis.

Jackson Guthy, who began playing the piano when he was four years old, turned 24 years of age on 19th March in 2020. This makes his zodiac sign Pisces.

Jackson Guthy’s father is an American businessman, best known as the co-founder of Guthy-Renker, which is an El Segundo-based direct-response marketing company. The company was founded in 1988 by Bill and Greg Renker. Guthy-Renker, as we know, has partnered with many celebrities as well as physicians to launch their skin and hair care products.

Bill has been featured in Fortune Magazine on its list of America’s Smartest Young Entrepreneurs and has been honored as one of Inc. Magazine’s Entrepreneurs of the Year (2013).

With partner Greg Renker, he was also honored by Goldman Sachs as two of the 100 Most Intriguing Entrepreneurs during the 2013 Innovators Summit.

Furthermore, Bill who has been married to Jackson’s mother, Victoria, graduated from Ambassador College in Pasadena, California.

For siblings we know, Jackson has one elder sister. The Guthy siblings and their parents lived in their family estate in Malibu.

In 2012, the Guthys had paid Ellen DeGeneres $13 million to acquire her Malibu home which was the former marital home of Brad Pitt and Jennifer Aniston.

Immensely good-looking Jackson Guthy, who besides being a musician is a model, stands to a height of 6′ 2″ and a lately listed weight of around 84 Kg or 185 lbs.

Jackson Guthy was on Instagram with more than 167k followers (until 9th December in 2020).

For now, it was not reported anywhere, how much the up and coming singer and songwriter had bagged for his net worth.

Even so, what we know for sure is that he is entitled to his father’s $600 million and more.

[Note: Bill Guthy’s net worth from real estate alone is at least $100 million.]

Also, just so you know, Jackson toured with Big Time Rush and One Direction during the 2012 Better With U Tour. Plus, he covered the Owl City song “Good Time” with Modern Family actor Ariel Winter.

The two started dating in early 2019 but broke up in May the same year. They got back together two months later and now are all over one another’s social media pages. 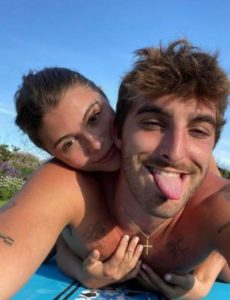 Olivia, who was doomed of her partnership with Sephora, as well as her several other sponsorships for her beauty channel and Instagram posts, seemed to be gaining the most comfort from her Jackson during the hard times. So much so, it was reported during the wake of the scandal, that Olivia refused to speak or live with her parents and went on hiding out at Jackson’s family home.

During the early-December (2020) episode of Jada Pinkett Smith’s Facebook Watch show, she had a lot of say. Excerpts from which being,

“…I think what is so important to me is to learn from the mistake, not to now be shamed and punished and never given a second chance, because I am 21. I feel like I deserve a second chance to redeem myself, to show I have grown.”

Olivia, who on the brighter side, was able to remain enrolled at USC along with her sister, continued:

“That’s why it’s hard because I’m not trying to come off like … I am not trying to victimize myself. I don’t want pity, I don’t deserve pity. We messed up.”

Both Olivia and her sibling previously studied at Marymount High School.