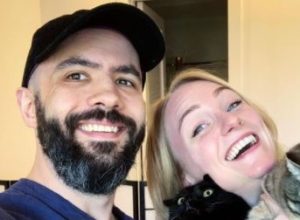 Jessica Opon soared to celebrity status as the girlfriend of Andrew Rea. To those unfamiliar, Andrew Rea is the host of the cooking show “Binging With Babish”. As of January 2021, Jessica hadn’t become Andrew’s wife yet.

This Jessica Opon wiki explores facts about Andrea Rea’s romantic partner including her age, job, and height. Moreover, it highlights her dance background and net worth.

In early 2021, Jessica Opon touched 30 years of age. Born a Capricorn, Jessica wakes up to birthday messages on 10th January.

A native of Illinois, Jessica was born to her parents: Eric Opon (father) and Patty Wadsworth Opon (mother).

As noted on their Facebook profiles, Eric and Patty tied the knot in May 1983.

Jessica is one of three daughters born to Eric and Patty. Her sister Stephanie, as of this writing, was an employee at Wesley Willows. Her other sister Kristin, meanwhile, worked as a teacher at Evolve Dance Company.

By the end of 2020, Jessica reportedly weighed under 54 kg. Her background in dance surely helped the Rockford, Illinois-native forged a beautiful physique.

Also, Jessica seemed active on Facebook. Her presence, on the other hand, seemed none.

As far as she can remember, Jessica Opon always wanted to dance on Broadway. Pursuing her dreams, she joined a pro dance company and gathered experience.

Later in her career, Jessica realized she didn’t want to be in the spotlight anymore. She then switched to filmmaking. For her, editing felt like choreographing a dance.

Working as an editor, as she wrote on her LinkedIn profile, Jessica strived “to find balance, rhythm, and compelling moments in my work to serve the story as a whole”.

Jessica’s career began as a Post Production Intern at IMAGINAUT ENTERTAINMENT INC. She held the gig for about 3 months.

With Vice, Jessica became a part of the team that won an Emmy for their coverage of “Charlottesville: Race and Terror”. She left the company in July 2020. After that, she began making her living as a Video Editor, Producer, and Shooter.

Jessica also dabbled in acting. She even owned an IMDB page.

Working as a freelance creator, Jessica Opon reportedly made around $52,000 a year. Meanwhile, the “Binging With Babish” host Andrew Rea enjoyed a $1.4 million net worth.

Before he began dating Jessica Opon, Andrew Rea was married to his first wife. According to Andrew, he and his now-ex were childhood sweethearts. By his admission, she was supportive of his work.

By 2018, the marriage between Andrew and his wife had fallen apart. He even stopped wearing his wedding band. A year earlier, Andrew had finalized his divorce. He and his ex enjoyed marital bliss for 3 years.

In September 2018, Jessica and Andrew started dating. To mark their 2nd anniversary, she took to IG and wrote— “Today celebrates meeting my best friend. He challenges me, believes in me, doesn’t judge me, and reminds me daily that I’m worthy. He also makes me laugh harder than I ever thought was possible. To my equal, Happy Anniversary!”

As of January 2021, the wedding bells were yet to ring for Jessica and her boyfriend, Andrew.