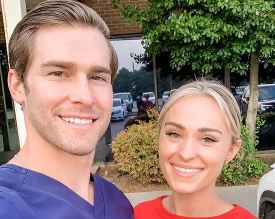 Ashley Prochazka rose to fame as the contestant on “Making The Team”. She would further her popularity by marrying Clay Honeycutt.

Here is everything you need to know about this Ashley Prochazka wiki!

In 2020, Ashley turned 30 years of age. She’s a native of Russellville, Arkansas.

Mourning her father’s death on IG, Ashley wrote— “I lost the first man I ever loved & my biggest fan on Sunday. I have so many words to say about him but right now all I can really manage to say is that I miss him so much & wish he could’ve walked his little girl down the aisle. But I know he’ll be waiting at Heaven’s gates for me, to walk me down an even bigger aisle one day. I Love you Dad. I’ll see you soon & I can’t wait for our first dance in Heaven together. -Love your Ash Bash ❤️”

For siblings, Ashley has Jeremy, Adrienne, Sarah, and Rachel. As of 2021, Jeremy was married to a woman named Kala.

More on her family: Helen Francis (Mahoney) Andrey and Jerry Prochazka are her paternal grandparents.

Going by her pictures, Ashley Prochazka stands under 5 feet 7 inches in height.

Meanwhile, her weight should be under 54 kg.

As of Jan 2021, Ashley had nearly 500 posts on Instagram. Around the same time, she enjoyed around 23 thousand followers.

From May 2014 until May 2015, Ashley was a cheerleader for Dallas Cowboys.

As of Jan 2021, Ashley Prochazka had 2 jobs— Territory Manager at The Styling Stewardess and Territory Sales Manager at Carwin Pharmaceutical Associates.

Her Making The Team Journey

For 3 consecutive seasons, Ashley appeared on “Making The Team”.

In the 8th season, Ashley didn’t make the team. The subsequent season saw her land a spot on the final squad. Meanwhile, in the 10th season, she didn’t receive an invitation to the training camp.

In January 2018, Ashley made it Instagram official with Clay. For the next 2 years, the couple traveled extensively, visiting The Bahamas, New York City, and Mexico.

Ashely and Clay became an engaged couple in March 2020. Clay popped the question on his surprise birthday party that Ashley help put together.

According to this wedding registry, Ashely and Clay tied the knot in October 2020.