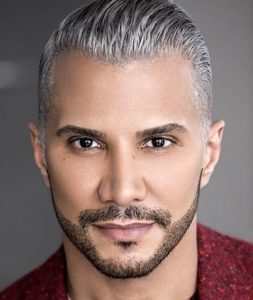 Jay Manuel is a Canadian-American makeup artist who stood in the limelight as a former judge to America’s Next Top Model (ANTM). Though he attributed his retirement from the show to explore other careers, Jay also made it clear that he had enough of racist and anti-gay comments directed at him.

Furthermore, Jay provided fashion commentary on the red carpet for E! Entertainment Television’s Fashion Police. Also, he was the host to Style Her Famous on the Style Network and appeared once on an episode of Degrassi Takes Manhattan.

Many might have missed the adventures Jay had after he departed from ANTM. Here, we are to let you in on what Jay Manuel is doing now. Moreover, learn about his partner and dating history through this wiki-style article.

Jay Manuel was born on Aug 14, 1972, in Springfield, Illinois. Though there were no reports about his siblings, Jay might have had one before he was adopted.

Adopted by Canadian parents, Jay grew up in Toronto, Canada. As for his biological parents, his father was a Malaysian-Indian from South Africa, and his mother is Italian and Czech descent. So, that makes him of mixed ethnicity.

As for his education, Jay graduated from York University majoring in pre-med and opera. Later, he went on to work with the Metropolitan Opera before shifting his career to fashion.

How Much Is Jay Manuel’s Net Worth?

Spending over 20 years on and off camera, Jay has worked as a Fashion Correspondent, Series Regular, Host, Judge, Creative Director, and Executive Producer on some of the decade’s popular television shows.

Furthermore, he was also invited to share the red carpet at the Emmys, the SAG Awards, the Grammys, the Golden Globes, and the Oscars.

Riding the fame, Jay has released several fashion products under his self-titled brand. Also, his popular products like The Ultimate Lip Stain Stiletto, Hydroluminous Sheer Foundation, The Everything Mascara and many more were sold over the amazon.

Accounting his assets and earnings, Jay Manuel’s net worth can be estimated to be $3 million.

Jay Manuel Now: What Happened To Him?

Allegedly, Jay was fired from ANTM after 18 seasons in 2012 and only made minor appearances on the TV shows after. But, his reason to lay low was uncovered as he admitted to having fun as an author.

In early 2020, Jay was writing a satirical novel based on his experience on ANTM. The novel was scheduled to be released on Aug 3 that year titled The Wig, The Bitch & The Meltdown. Furthermore, he mentioned that all of the characters in the book took on a life of their own and were inspired by people in his life.

Also during the time, Jay collaborated with the former supermodel, Iman to open a beauty company. The company was established in 2015 under the name Jay Manuel Beauty. Unfortunately, the company seemed to have discontinued and was defunct as of 2020.

You may like – Chloe Coleman Parents, Siblings, Net Worth, Age, Bio, Wiki

The rumors about Jay Manuel being good friends with Tyra Banks came to an end when he came clean about their relationship. In early 2020, he admitted that despite sharing the same stage for years, they didn’t have any relation (not even as acquaintances).

As Jay kept his dating life private, there was another rumor about him dating late famous fashion photographer, Francesco Scavullo. Supposedly, Jay dated him but he had yet to admit it.

Allegedly, his partner Francesco was 51 years older than him and was married.

Check this – Is Emmy Raver-Lampman Married Or Dating? Partner Info

Tyra Banks’s popularity often drags her beaux into fame as well. In 2020, she made her recent...

Justine Biticon received her first crack at fame by appearing in the 2015 installment of...