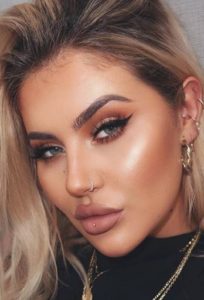 Jamie Genevieve is a true social media influencer and a YouTuber specializing in make-up tutorials. Like most of the makeup artists, she owns an eponymous channel.

This wiki-style article brings you details on the makeup artist’s professional and personal life.

Jamie Grant is Scotland-native born on 25 June 1993. She grew up in a housing estate in Tillicoultry, Clackmannanshire, Central Scotland.

She reminisces playing outside with her father, as she was daddy’s girl. Jamie is close to both of her parents though she often misses to utter their names.

Jamie moved 35 miles away to Glasgow determined to earn herself a living at the age of 11. In the process, she had to let go off her education for full focus on her career.

On 29 November 2016, Jamie posted a video titled TATTOO TAG dedicated to her tattoos.

Per the clip, Jamie had her first tattoo – two little birds on the back of her right shoulder – when she was fifteen.

Also, Jamie has decorated herself with multiple tattoos on her hands, sleeves, fingers, arms, lips, waist and elbows.

Jamie’s career as a makeup artist started when she first discovered makeup at the age of fifteen.

She worked herself way up in the hierarchy of Glasgow’s makeup scene. She understood that makeup business was people business. Her work on people brought customer retention which proved necessary for her coverage in social media.

Now several brands of makeup are endorsing her to review and represent their products.

Jamie’s prominence got her an opportunity to create a documentary with BBC Scotland.

Like most, She prefers not to disclose her earning and personal net worth but she noted in an interview,

Me saying it has changed mine and my family’s lives, that doesn’t even touch on it.

It’s the difference it has made in my family not having to worry any more.

Jamie met husband Jack McCann in the Park music festival after she moved to Glasgow.

In an interview with GlamSquad, Jaime noted the pair shared their first romantic flare immediately after they saw each other. But they didn’t speak to each other until she was eighteen.

The couple started dating each other after a mutual friend paired them up in Paris. They had their first real kiss at the top of Notre-Dame. 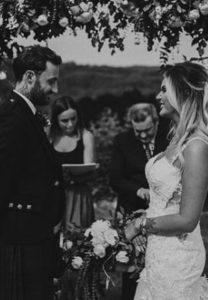 After two years in, the engaged couple shared their vows on 9 July 2019.

The wedding happened in Italy at Borgo Corsignano resort. The outdoor ceremony stunned guests with its luxury which was organized by Distinctive Italy Weddings.

Jamie walking down the flower-covered aisle on her $2000 satin gown designed by Eleganza Sposa was quite a sight to see.

As of February 2020, It seemed that the married couple haven’t made any plans regarding kids yet. But fans are patiently waiting for Jaime and husband Jack to give the good news and so are we.