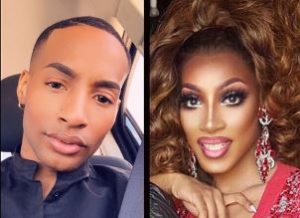 Follow along and discover Jaida’s important wikis including her boyfriend, height, and family. Furthermore, read about her age, real name, and dating status!

If the given date of birth were true, Jaida was a Sagittarius. From her zodiac sign, she garnered admirable characteristics like assertiveness and openness.

As noticed by so many, Jaida Essence Hall isn’t her real name. She was born as Jared Johnson in America. Thus, Jaida owned an American passport. Likewise, she allegedly inherited her ethnicity from her African-American parents.

Jaida wasn’t her dad and mom’s only offspring — she was raised alongside her brother. Moreover, the Johnson family embraced Jaida’s life choices. One instance of their support arrived in “RuPaul’s Drag” finale when they recorded a supportive message.

More so than her father and sibling, Jaida admired her late-grandmother the most. In her acceptance speech, she said:

“I would want to tell my grandmother, ‘Thank you so much for being the first person to accept me for who I was even though I didn’t even know who I was then.’ She was this super glamorous woman all the time. … Every time I get to step on the stage in drag I get to live this glamorous fantasy. I get to live all the opportunities I don’t get to share with my grandmother now.”

Along with family support, Jaida credited her tough upbringing for shaping her winner mentality. Growing up, she had to fight for everything. For the same reason, Jaida held her city in high regard.
Moving on from her real to the drag family, Jaida considered Tajma Hall as her mother. Similarly, she had Mercedes Iman Diamond, Dida Ritz, and Kahmora Hall for drag siblings.

For Jared, Jaida was a mere persona. The curves she flaunted while dragging wasn’t real. Nonetheless, Jaida Essence Hall weighed around 59 kilograms weight and stood around five feet nine inches in height.

Jaida Essence Hall made a sound online presence. On Instagram, she had around 386k followers by late-May 2020. Elsewhere on Twitter and Facebook, Jaida garnered 115k and 10k followers respectively.

Circa early-2010, Jaida began her drag career. Immersing herself in the local drag scene, she went on to win several pageants like Miss Five, Miss Gay Madison, Miss Wisconsin Club, and Miss City of the Lakes.

Based in West Allis, Milwaukee, Jaida became a regular at Hamburger Mary’s. She also performed at Milwaukee Bucks halftime show and PrideFest.

As for her job, Jaida worked as a costume designer and a makeup artist. By winning the “RuPaul’s Drag Race” competition, she pocketed $100k in prize money. No doubt, the reward added to Jaida Essence Hall’s $500k net worth.

As with every drag queen, Jaide Essence Hall most probably identified as gay — or somewhere along the LGBTQ spectrum. Nevertheless, the VH1 star seemed happy with her lifestyle.

A loving individual, Jaide’s middle name “Essence” was the gift from her boyfriend. According to Jaide, her mysterious boyfriend once described her as “the Essence of beauty” in a text.

Meanwhile, Jaide once admitted that her furtive boyfriend made jewelry for her to wear on shows. In another instance, Jaide revealed she once peed on him while judging a drag pageant.

2020 marked Jaide and her partner’s 12 years together. If true, they started dating in 2008 — which meant the duo were an item long before Jaide began dragging. No wonder, fans dubbed him “the one” for her.

Along with Jeremiah Brent & Gabriele Bertaccini, Thai Nguyen made the 3-man team who ran the Netflix show...