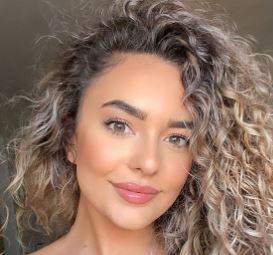 In Dec 2020, the former Bachelorette contestant Tyler Cameron bought his fans a “new model”, after his famous fling with Gigi Hadid.

Tyler was spotted leaving along with Ireland Borba after sharing dinner with few friends in New York. However, when he was asking what was going on between them, Tyler replied that he was “not dating her.”

So, who is this girl that Tyler was “not dating”, but heading out to spend some quality time with? Learn all about her over this short bio.

Corresponding to her birthday, Ireland is of the Taurus zodiac.

Ireland Borba was born in Reno, Nevada, and holds an American nationality. Before 2020, she lived in places like San Diego, Miami, and New York.

As per “ancesty.com”, the “Broba” family name is Portuguese. However, it was also reported that Brazil had most Brobas. So, Ireland’s race could either be Portuguese or Brazillian.

Though Ireland didn’t share much about her parents, she once tagged Doug Hexum as her “favorite dad” over Twitter.

As for her interests, Ireland loved animals; especially dogs. She had a white dog often seen napping and playing with Borba over her Instagram.

Reportedly, her body measurements were 33-24-35 inches.

As of December 2020, Ireland entertained 54.3K followers over Instagram @irelandborba. She often posted sexy selfies or modeling photoshoots over there.

Talking about her job, she is an Instagram model who often did photoshoots in bikinis and sexy outfits. Also, she was a fashion ambassador for many companies including Fashion Nova.

Before becoming a model, she worked in the Rehab wellness program at Oregon Health & Science University for almost two and a half years.

In light of her education, Ireland went to Rocky Mountain High School. Later, she attended San Diego State University from 2016 to 2019.

As of 2020, Ireland Borba didn’t speak much about her relationship with Tyler Cameron. Though Tyler denied that he was dating Ireland, fans had their eyes fixated on them.

However, Ireland also had a similar gossip in 2019 with Dallas Cowboys quarterback Dak Prescott. They were seen on a date at a participatory golf center in Tampa, Florida but it wasn’t clear what happened between them.

It seems like Ireland was still on good terms with Dak and his family, even after rumors ended. In April 2020, she tweeted in Dak’s support after his brother died by suicide.

Just in case you don’t know who Dak Prescott is, he is an American football quarterback for the Dallas Cowboys of the National Football League (NFL). Previously, he played college football for the Mississippi State Bulldogs and got selected by the Cowboys in the 4th round of the NFL Draft 2016.

But Ireland wasn’t the only one who dated the stars. Her 2020 romance interest, Tyler Cameron was linked to the supermodel Gigi Hadid. They dated for almost two months and we’re on good terms as “friends.”

Before Gigi, Tyler was also rumored to be dating Hannah Brown after The Bachelorette season 15 finale. Even though Hannah chose Jed Wyatt over Tyle for the final rose, fans were convinced that these two were officially more than friends off-screen.

Apart from this, before the gossips with celebs, Ireland also seemed to have had a boyfriend who wasn’t in the limelight. He appeared a few times over Ireland’s Facebook from 2016 to 2017. A comment over their lovey-dovey picture wrote, “Such a handsome couple!”, which Ireland had liked.