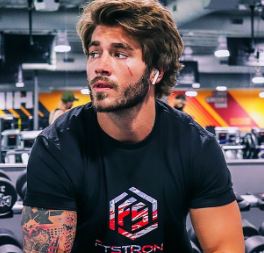 Gus Smyrnios earned the title of reality star after he joined MTV Floribama Shore in 2017. Ever since he has been in the spotlight, his family members have been the concern for his fans. So scroll down to learn more about Gus Smyrnios’s family members including his sisters, brother, father, and mother.

Gus Caleb Smyrnios was born on 20 March 1995. He turned 26 years old while celebrating his birthday in March of 2021. He attended Aucilla Christian Academy and Santa Fe College hailed from his hometown of Tallahassee, Florida.

The handsome-hunk joined MTV Floribama Shore where he earned respect for his respectful nature towards women. Along with the reality show, he also pursued a career in modeling. Later in 2019, he joined The Challenge where he appeared in 11 episodes.

The proceeds which Gus Smyrnios received from the show and his modeling gig earned him a total net worth under $100 thousand. Talking about his physical features, Gus stood tall at 5 feet 11 inches (1.80 meters).

He attended and graduated from Aucilla Christian Academy in 2013. Like his father, he also sent an application at the age of 19, to become a state trooper. When he was turned down, Gus enlisted in the U.S. Marines but after the skateboarding accident that affected his arm, he let go of his dreams.

Gus Smyrnios was born to his father Gus Smyrnois, son of Gus Smyrnois and mother Rita Rains, and his biological mother Kristen Nicole Overstreet Wright. His father was one of the identical triplets his paternal grandparents gave birth to.

As for her paternal grandmother, Rita Rains remarried Bill Rains.

The reality star’s paternal grandfather served FHP for 28 years before he retired. His father, Gus, received a pin for 25 years of service. Along with that, his uncle George also served FHP for 23 years and also worked as a school teacher.

Furthermore, two of the triplets were stationed at Ft. Meyers, third triplets at Lakeland, and their father Gus Sr. at Steinhatchee.

After Gus and Kristen ended their marriage, Gus tied the knots with Audrey Wasdin. Whereas, Kristen married Ronnie Wright. Gus along with his three siblings, moved to Perry when he was only seven or eight years old.

Who Is Gus Smyrnios Step-Mom?

After the divorce of Gus’s parents, a new lady named Audry Wasdin came into his life. His father and his step-mom, Audry tied knots on 26 November 2015.

On the day of their marriage, Gus took his to his Instagram to congratulate his father and step-mom. He also remarked that he was very that his father got the second shot at love. Plus, he shared that had hadn’t seen his father that happy in years at that point.

Talking about Gus’s siblings, he is the eldest of three siblings. He has a brother Seth Allen Smyrnios and two sisters Leah Smyrnios and Hannah Smyrnios.

Leah is only on Instagram where she earned 3478 followers in total. She graduated from college in 2021.

As for Hannah, she was born in 1997. She resides in Perry, Florida. She earned 1.6k followers on Instagram. In one of the March 2021 episodes of Floribama Shore viewers showed Hannah threatening Cadance Renee Rice.

In the heat of the moment Hannah disgorged, “if anything f****** happens to my brother, I’m going to personally beat your f****** ass.” However, her career and job remain away from the public attention.

But, the statement which Hannah made attracted criticism from the viewers of the show.

Seth Allen Smyrnios has a younger brother named Gus Smyrnios. He hailed from Lakeland, Florida, and resides in Perry, Florida. Cycling, playing basketball, and skateboarding are among the hobbies that he has.

Seth married Haleigh Smyrnios in October 2020 and are living happily together in Perry ever since. His Instagram account earned 16.4k followers on Instagram as of March 2021.

Based on the Instagram of Seth, he proposed to his then-girlfriend on 29 February 2020. Not only that, but he also revealed the couple getting pregnant. They welcomed their baby girl on 14 April 2020.

To share about Haleigh, she attended Aveda Institute Tallahassee. She worked at New Dimensions Health and Fitness Center followed by Thrive Brand Promoter. She also worked as a Cosmetologist at Spring Place Salon.