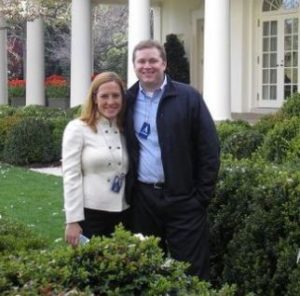 Gregory Mecher earned the spotlight back in the Obama administration when his wife Jen Psaki worked as the communication director. And when Joe Biden became the president-elect, he recruited Jen as his press secretary.

However, Gregory himself also had a long history working in D.C. himself. Scroll down, as this wiki article unfolds details on Gregory.

Gregory Mecher celebrated turning 44 years in September of 2020. Ever since he was born in 1976, he has been celebrating her birthday on 30 September.

Per her date of birth, Gregory Mecher owned Libra as his zodiac sign.

Hailing from the hometown of Cincinnati, Gregory Matthew Mecher was born to his parents: Michael Mecher and Mary Ann Mecher.

His father, Michael worked as an engineer for HK Systems, a business based in Hebron, Kentucky.

Whereas, his mother, Mary was a school teacher in a school located locally.

More on his family: Gregory grew up with two siblings, his brothers Dan Mecher and David Mecher.

Both Gregory and his wife are associated with the US Democratic political party.

Compared to all of the brothers, Gregory is chubbier which turned out to be his distinct features. He keeps short curly hair, has fair skin, and always has a smile on his face.

Talking about social media reach, Gregory Mecher doesn’t seem very interested in being social media. He is on Facebook but hasn’t shared anything since 2014 on the platform.

Starting with Gregory Mecher’s education, he attended Elder High School. After graduation, he enrolled at Northern Kentucky University and graduated in 1999.

Gregory graduated with a BA degree in communications and television productions. While he thrived academically, he also actively strived to establish his political career. He also went on to serve as the president of the NKU Student Government Association (SGA).

During his time in college, Gregory commuted from Cincinnati to NKU and lived with his grandparents occasionally. Still, he found time for extra work other than college.

Furthermore, Gregory Mecher served as a student senate for two years. His work in SGA landed him the opportunity to move to Washington D.C. kickstarting his career in the capital.

Not only that, but Gregory also landed the internship opportunity working for Congressman Ken Lucas. He worked on Capitol Hill.

Already exposed to a political career, Gregory moved to pursue his career in the capital. He started working for big names in the political scenes in D.C.

Steve Driehaus and Patrick Kennedy are among the other names with whom Gregory worked while in Washington D.C. Also, he worked for John Kennedy III as a Chief of Staff working with the Democratic Congressional Campaign Committee.

Meanwhile, Gregory Mecher’s work during that period earned him a total net worth of $1.5 million.

Gregory Mecher commits himself to marriage with Jennifer ‘Jen’ Psaki. The couple tied knots in a beautiful wedding at Woodlawn Farm in Maryland on 8 May 2010.

However, the married always found distance between the two because of the campaign trail they were on. Still, the distance couldn’t deter their trust in each other and their marriage still went strong.

The couple was expecting their first kid when Jen Psaki was working in the communications team in the Obama Administration. The married couple welcomed their daughter Vivi Mecher in June of 2015.

Gregory and Jen also had another child with very little information about them.