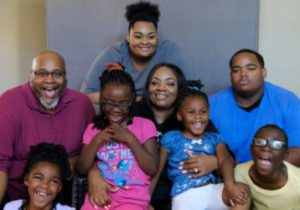 The story of Ms. Pat goes that she used to sell crack cocaine, was shot twice, arrested countless times, and hit by a dump truck once before she met her husband Garrett Lee. Not to mention that she already had two kids and was only 19 years of age at that time.

In this article, we invite you, readers, to know who was Garett Lee, apart from the man who, in a way, pulled Ms. Pat out of the dark corner of misery and into a more fruitful and eventually successful life. Over this Garrett Lee wiki, read everything about Ms. Pat’s husband here including his age, job, etc.

We do not know the year Garett Kee was born in but he celebrated his birthday every year on the 25th of June. The best estimate of his age is that he must be under 60 as of 2021. His zodiac sign was Cancer.

The only information about Garett’s family comes from a 2015 Tweet from Ms. Pat that says “Husband lost mother/father with n a yr. Father in law wearing his @colts hats because we move to Indy.” So, apparently, Garett’s father and mother both died in 2015.

While we are still on the topic of family, Ms. Pat herself did not very good relationship with her parents. Her mother, Mildred, was an abusive drunk. Her grandfather, apparently, sold “moonshine” in a “liquor house”. Also, she has an older sister, whose name we do not know.

Garett’s height was 5 ft 9 inches, not too tall for an American but just about average. We do not know much about his distinct features. But The Washington Post described him in a 2018 article, as looking “as if he has been crafted for sitcom immortality, his head perpetually in his hands, his resigned smile telling you that he knows this place is crazy, but he wouldn’t have it any other way.”

Talking about his job, Garett Lee is a machinist at General Motors. Ms. Pat had also mentioned that Garett was in the US Army for 5 years and was a veteran. The salary of an average Machinist at General Motors was about $31 to $34 per hour. The company transferred him to Indianapolis in 2006. And Garrett and Ms. Pat and a lot of kids, some their own and some not, live in Indianapolis.

His wife, Ms. Pat is a comedian and “a veteran of Comedy Central and Nickelodeon”. She has a long career as a stand-up comedian and TV show persona. For Ms. Pat, comedy is not just a career but salvation that pulled her out of the dark times.

Ms. Pat had recently written a memoir called Rabbit, an ode to her drug-dealing days when she was called Rabbit.

Garrett Lee first met Ms. Pat, or Patricia Williams, in 1993 at a comedy club in Atlanta. When they first met, Garrett could not believe that the girl he just met was selling crack. He visited her apartment and thought that was “a normal household” and nobody was “getting high or drunk” and Patricia was taking care of her kids.

Patricia had her first two kids, who she calls “Medicaid kids” before she was even in high school. Her first child Ashley was born on 9 August 1986, four months after she turned 14. And by the November of 1987, she had her second child Nikia. The father of the kids was a man called Darrell Laye, who was 21 by the time Ashley was born. Patricia’s older kids were with her during her dark days and thus understand the struggle.

It was Darrell who taught Patricia to sell crack. He was also an abusive partner, who would torment her psychologically and physically. He would smack her with a gun, which once went off and wounded her on the back of her head. Patricia ended her relationship with Darrell in 1993, around the time she met Garrett.

Everything changed after Patricia met Garrett. He was a stable presence in her unstable life. Even when they first moved to Indianapolis and lived in a cramped apartment with Garrett’s salary.

We do not know when exactly, Garrett and Patricia got married but they celebrate their wedding anniversary every year on the 5th of December. They have two kids together, a daughter Garrianna (23 years of age), and a son Garrett Jr. (21 years of age). She calls her younger kids “Blue Cross/Blue Shield kids”.

Apart from her own four kids, Patricia got full custody of her niece’s four kids after her niece, who was a drug addict, disappeared. Ramon and Yolanda (both 8 years of age) were the oldest and Ciisha (3 years of age) was the youngest, and there was also Porchia (6 years of age).

Garrett and Patricia have enjoyed a long happy married life and it seems both are still in love with each other. Pat still makes some jokes about her husband in her stand-up routines, all in good faith. But she also appreciates him for being a good man and a good husband.