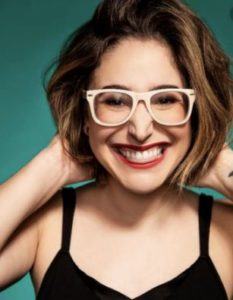 Every bone in Gaby Dunn’s body screams creative genius. A multi-faceted individual, she dabbles in everything — from activism, acting, journalism to blogging and operating a hit podcast.

By reading along the wiki down below, get to know Gaby’s professional and romantic milestones!

Growing up, Gaby received unconditional love from her family. Her parents – per her social media posts – were very supportive of her goals.

More on her family life: Gaby is siblings with baby sister Cheyenne Dunn. The two seem more friends than sisters.

Net Worth, Podcast Plus Books

At one point in life, Gaby Dunn owed $32k debt. Drawing from the terrifying experience, she started a personal finance podcast called “Bad With Money.”

On the back of her successful podcast career, Gaby penned a book deal. Per the agreement, she received $150k as an advance for the book “Bad With Money.” “I Hate Everyone But You,” “Please Send Help” and “Bury The Lede” are her other books.

With partner and best friend Allison Raskin, Gaby created a web series titled “Just Between Us.”

As a creative, Gaby has earned features on publications such as “The New York Times,” “Vanity Fair” and “Buzzfeed.” Back in 2010, “Village Voice” had named her tumbler blog as the best blog.

From an impressive array of job titles, Gaby reportedly flaunts a seven-digit net worth.

Gaby Dunn is extremely open about her sexuality and preferences. On Twitter bio, she proudly writes being a “professionally bisexual.”

Dating confirmation, however, wouldn’t arrive until June 2019. Mal became her official girlfriend after Gaby shared a photo of them on Instagram. 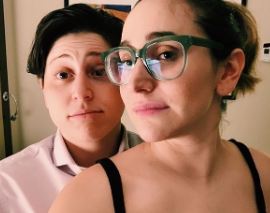 Surprisingly, Gaby stirred controversy in October 2018 after she posted a snap of her kissing Hellen Rosevelt.