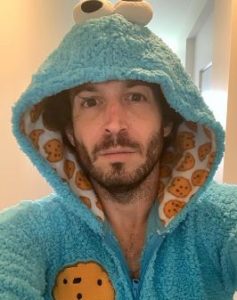 For a long time, Brandon Frankel dabbled in anonymity. All of which changed when he was outed as Gabourey Sidibe’s romantic partner.

Know about Brandon’s bio details including job, family background, and family by studying his wiki!

Born in 1984, Brandon Frankel turned 35 years of age in late-2019. Moreover, he carries a Caucasian ethnicity.

A Saggitarius by zodiac sign, Brandon celebrates his birthday in December every calendar year.

Speaking of family life, Brandon doesn’t appear to be his biological father and mother’s only single child. As seen on Instagram, he is siblings with a brother named Zack Frankel.

With a private Twitter handle and the absence of a verified Wiki profile, Brandon’s formative years remained a private affair.

As of late-Nov 2020, Brandon Frankel had accumulated around 30.5k followers on Instagram.

Likewise, on social media, Brandon often referred to her cat as “my daughter.”

What’s more, Brandon once shared a photo of him with Shakira on his Instagram.

A senior executive now, Brandon received his start on show-biz in the early-2000s as a college rep of “Atlantic Records.” He would eventually get hired as the conglomerate’s field marketing in March 2004.

Leaving the job at “Atlantic Records” in June 2010, Brandon then took an executive role at the prestigious “CAA.”

Between October 2014 and December 2017, Brandon was employed by “The Windish Agency.” He then took his talents to “Paradigm Talent Agency.”

Taking a giant leap of faith, Brandon Frankel founded “We Are Contra, LLC” in January 2018. In October 2019, he joined “Sony Music Masterworks” as a freelance consultant.

Circa July 2020, Brandon started a strategic partnership with “Cameo”. As noted on his Linkedin, he was helping to onboard celebrities to help them bring Cameo moments to the world.

Factoring in all his job titles, Brandon could easily bank $1 million+ sum in net worth. Meanwhile, the veteran show-biz branding and marketing exec measure five fee & eleven inches in height.

Furthermore, in April 2019, Brandon took a trip to Disneyworld.

Brandon Frankel first hinted at his relationship with Gabourey Sidibe via a May 2019 Instagram post. In subsequent months, dating rumors swirled as the “Empire” actress subtly hinted at the blossoming romance. 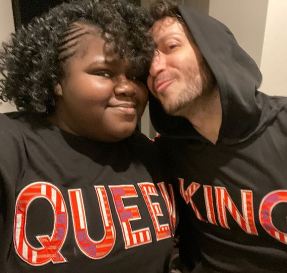 Fast forward to the New Year 2020, Brandon all but confirmed Gabourey as his girlfriend by uploading an epic Instagram post. In the accompanying caption, he labeled his wife prospect “Queen.”

The exchange, in turn, gave birth to marriage speculation. At the time, neither Brandon nor Gabourey immediately offered to clarify whether they were married, engaged, or simply dating.

On 2020 Valentine’s Day, Brandon penned a sweet Instagram post dedicated toward Gabourey. In it, he professed his undying love for the actress.

For her part, Gabourey shared a photo of the cake ordered by Brandon. An accompanying note read “To My Gab Babe.”

Finally, in Nov 2020, Brandon proposed with help from his cat. Sharing photos from the day they got engaged, he wrote— “I asked my best friend to marry me, and she said “YES”! So excited to spend the rest of my life with the most amazing, hilarious, beautiful, and inspiring woman I’ve ever known. I couldn’t imagine life without you. We make the best team, and we make everything fun and memorable. I liked it, so I put 💍 on it. Love you to the moon and back @gabby3shabby.”

Meanwhile, Gabourey offered more details on how their engagement wrote. In her IG post, she raved about Brandon writing— “My BFF proposed and now I get to hold him forever. The funniest man I’ve ever met. The sweetest human to exist.”

Brooklyn’s Drill music saw many aspiring artists with a lot to offer to the genre. However, only a few...

At the 2019 VMAs, Lizzo gave the performance of the lifetime. Performing smash hit singles “Truth...