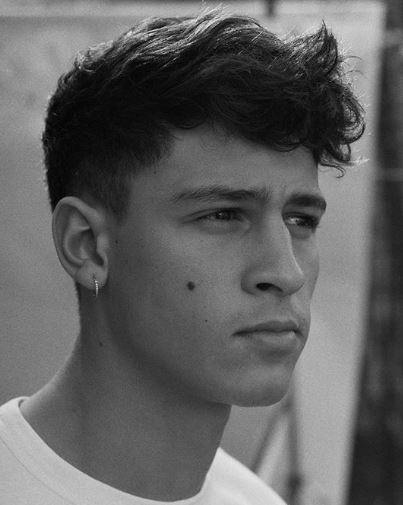 Furthermore, Emilio first came to limelight with his role as Tarik Schmüll in the movie Bibi & Tina (2017). Also, he was popular for the leading role in the TV show Tatort – Söhne und Väter that same year.

Divulge on the insides of Emilio Sakraya through this short bio. Also, get to know his parents, girlfriend, and gay rumor as the article unfolds.

Date of birth – June 29, 1996, Emilio Sakraya was 24 years of age as Netflix’s Warrior Nun premiered in 2020. He was born in Berlin, Germany, and holds German nationality.

Corresponding to his birthday, Emilio is of Cancer zodiac — same as his on-screen girlfriend Alba Baptista.

Emilio was only 9 years of age when he began his acting career. During his childhood days, Emilio was interested in music and physical arts like –  karate, kung fu, and parkour. Moreover, he is a trained martial artist who won the German Championship in “Full-Contact Karate” twice.

With not much information on his parents and siblings, we just know that Emilio Sakraya is of Moroccan ethnicity.  Reportedly, his parents were supportive of him and encouraged him for martial arts training.

Apart from this, Emilio full name is Emilio Sakraya Moutaoukkil.

Besides being an actor, Emilio is a pop singer as well. He released his first single Down By The Lake in 2016. Also, his songs — Bisschen Allein, Drauf Bist, Roter Sand, and Berlin an der Spree trended in Germany.

Furthermore, he had a Spotify and Youtube channel where he uploaded several of his music (most of them were German).

Taking about his distinct features, Emilio had a physique of an athlete. Some said, his facial structure was somewhat identical to that of footballer Christiano Ronaldo. Also, he has a noticeable mole on his right cheek.

Reportedly, he had his ear pierced too.

As of 2020, Emilio was quite popular over social media. He had over 297K followers on Instagram @emilio-sakraya- and 1.2K followers (as he was Inactive) on Twitter. Also, his Facebook page @sakraya.emilio had over 15K followers.

Taking his fame to TikTok, Emilio had amassed over 360K followers on his account @emilio.sakraya. He posted several of his original content and also collaborated with TikTok stars like Karim Guenes.

Moreover, he uploaded most of his clips dancing at Flying Steps Academy. We speculate that he might have been a part of the academy.

TikTok star – @GirlWithGreenBeanie Wiki — All About The TikTok Star

As of 2020, Emilio Sakraya’s net worth was estimated to be around $750 thousand.

While he may have a huge gay following, it doesn’t particularly indicate that Emilio Sakraya is gay. Appearing on the Tiktok world, Emilio was bound to have gay rumors about him. But as of 2020, Emilio didn’t speak much about his sexuality.

Coming to his dating life, the question remained — who is Emilio Sakraya girlfriend?

As of July 2020, Emilio remained silent on his dating life. While the fans depicted Emilio’s on-screen romance Alba Baptista to be his real-life girlfriend. We are here to let you know that Alba was already in a 5-year long relation at the time. So, Emilio dating Alba was out of the question.

Furthermore, Emilio might be dating secretly or might be focused on his career. But with the rising popularity, Emilio’s relationship status is bound to surface soon.