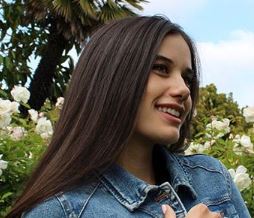 Ella Bleu Travolta, as her name suggests, was born to the legendary actor John Travolta and Kelly Preston. The latter died in July 2020 following more than two-year-long battle with breast cancer.

In light of the tragedy, Ella took to IG and remembered her mother as courageous, strong, beautiful, and loving. Also, in her post, she praised Kelly’s glow and light that made everyone around her happy.

Keep on reading and discover Ella’s wiki info such as her boyfriend, net worth, and height. Moreover, find out her education, siblings, and movies.

Ella discovered a love for acting through her parents who were successful actors.

Kelly Preston, Ella’s mother, became famous for her roles in films like “Mischief,” “Jack Frost,” “For The Love of the Game,” and “Jerry Maguire.”

Meanwhile, Ella’s father, John Travolta, soared to fame as the star of movies such as “Grease,” “Pulp Fiction,” and “Saturday Night Fever.”

Back in 2009, Ella Bleu Travolta lost her big brother, Jett Travolta, who tragically died after hitting his head during a seizure. He was only 16.

If her mother blessed Ella Bleu Travolta with timeless beauty, she recieved the 5 feet 10 inches height from her father.

As a teenager, Ella drew unnecessary criticism because of her weight. By her admission, people called her names like “fat.”

By 2019, Ella had adopted a “healthier” lifestyle and achieved an amazing weight loss transformation.

Among all the social media platforms available at her disposal, Ella seemed to like Instagram the most.

Interestingly, Ella never shared whether or not she attended college after completing high school.

Although famous all her life, Ella didn’t secure acting credits until she portrayed the character “Emily” in the 2009 film “Old Dogs.”

10 years after her debut, Ella starred as Becky Hunt in the flick “The Poison Rose.”

According to famousbirthdays.com, Ella joined the cast of the 2017 movie “The Life and Death of John Gotti.”

Also a musician, Ella performed on the original soundtrack of “Old Dogs.”

While her dad owned around $170 million in wealth, Ella Bleu Travolta summoned under $1 million net worth. Meanwhile, her late-mother possessed $180 million fortune.

According to Live Ramp Up, Ella Bleu Travolta wasn’t dating anyone in 2019.

A year later, nothing seemed to have changed as Ella hadn’t flaunted her boyfriend on Instagram.

Back in 2016, the Travolta-Peterson family appeared on “The Ellen DeGeneres Show”. When the host quizzed about Ella’s relationship status, her dad said:

“I don’t interfere with that.I’m saving her because she has two guys that she hangs out with, I don’t ask anything about what they say or do with each other.”

Ella’s mother then followed up by claiming she knew everything there was to know about her daughter’s love life.

For her part, Ella confined in the host she didn’t have a boyfriend.