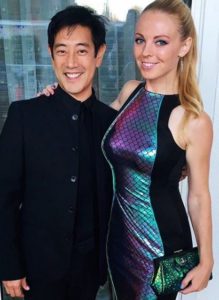 The host of Mythbusters passed away on 13 July 2020, leaving the fans of the show in an emotional state. The brain aneurysm which he suffered before taking his last breath claimed his life leaving his nearest and dearest mourning for him.

Among the people deeply affected by the loss was his fiance, Jennifer Newman. The pair shared an unscathed love for each other so she took the loss way too hard compared with others.

As his passing away brought attention to Jennifer, this wiki serves as a window into her life, career, and details on her family.

Jennifer Newman was born on the 7th of December. Per her date of birth, she hailed Sagittarius as her zodiac sign.

But, since Jennifer never opened up about the precise birthday details. Which is why her age eluded public knowledge. However, going by her appearance, she shouldn’t be more than in her mid-30s.

Jennifer Newman was born to her father Eric Newman and her mother Christina Olds. She spent her early childhood in Boise, Idaho with her parents. However, her parents parted ways later in their life.

More on her family, her pilot mother Christina is the daughter of Robin Olds, also a fighter pilot by trade and her grandmother, Ella Raines, a renowned Hollywood actress. Her maternal grandparents stayed married for 26 years eventually leading up to a split.

Her mother Christina Olds also wrote a biography on her grandfather Robin Olds. As a gesture of honoring her grandfather, Jennifer and her mother flew on the aircraft her Robin did in World War II.

Moreover, the blonde beauty boasts her desirable looks which she partly inherited from her beautiful mother.

With over a decade worth of career in entertainment, Jennifer Newman has garnered an impressive number of followers on her social media.

To know Jennifer established herself a career in Hollywood as a costume designer is something that is far from being unthinkable. As stated before, her grandmother was a Hollywood star and following the footsteps, she also built a career in entertainment.

Besides costume designing, Jennifer also acted on several movies such as There Will Be Brawl, The Death and Return of Superman (2011), The Viral Man (2012) among others.

As of the time of penning this piece, Jennifer Newman bagged an estimated net worth of $250 thousand.

Jennifer Newman & Grant Imahara allegedly met each other during their job as a prop designer. After dating for a while, Grant decided to take the relationship to a new level.

Grant proposed Jennifer at her birthday party held in Clifton’s Cafeteria in LA. Besides being engaged, the other interesting fact about the day was Grant proposed her with 1.56—carat ring which worth about $20,000 which he found in San Francisco.

The soon-to-be-married pair shared an undeniable love for each other until Grant’s death in July of 2020. The couple remained engaged to one another but the relationship didn’t see it through to the end owing to the untimely passing away of Grant.

Ella Raines Grant Imahara There Will Be Brawl UnDeadwood