Edwin Gawuala Bio: Now, Age, We Are The Brooklyn Saints 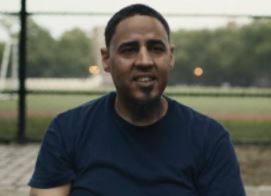 Netflix premiered its latest offering titled “We Are The Brooklyn Saints” in late-Jan 2021. The four-part docu-series followed the lives of young football athletes as well as the coaches and their parents. Coach Edwin Gawuala was one of the subjects featured on the show directed by the award-winning filmmaker Rudy Valdez.

In this Edwin Gawuala bio, read about some facts related to the Brooklyn Saints including his age, family, and job. Also, find out what he is doing now.

Coach Edwin Gawuala joined the Brooklyn Saints Youth Organization 9U program circa 2009. As a volunteer coach, he didn’t earn a dime from the gig.

Nevertheless, Edwin continued coaching the Brooklyn Saints. Even after losing essential matches, he continually inspired the kids to keep their heads up and have fun.

Although helping the kids find a path was a fulfilling endeavor, it became necessary for coach Edwin to land a job. In the end, a local psychiatric facility hired him as a cleaner.

Upon landing the job as a cleaner, Edwin seemed worried about not having enough time to coach the kids. To his surprise, his employer asked him to continue coaching and working with the Brooklyn Saints team.

But is coach Edwin still with The Brooklyn Saints? Well, there were conflicting reports. While thecinemaholic.com noted he didn’t have free time to coach the team, realitytidbit.com suggested he was still in the program.

Like many of his pupils he coached, Edwin Gawuala came from a tough upbringing.

Admittedly, Edwin grew up in a 2-bedroom apartment with his 5 siblings. Their mother raised them in a single-parent household.

Opening about his childhood, Edwin claimed he was young and lost in life. He also described his hometown, Brooklyn, as a stomping ground.

Remorseful about some of the choices he made, Edwin deals with them in his personal life.

Unlike the kids that he coached who will probably attend college, Edwin didn’t even finish high school. Looking back, surely he regretted dropping out.

Sometime in the mid-2010s, Edwin Gawuala lost his son. No doubt, the loss had a profound impact on his life.

Despite the tragedy, Edwin continued to see the brighter things in life. With the pupils that he coached, Edwin tried to lessen the pain.

“You basically raise a lot of these kids,” Edwin said about his students.

He then added, “They definitely become yours, and a piece of your heart. I just feed off the energy they give me and try to make a positive out of it.”

As of Jan 2021, Edwin’s relationship status remained a low-key affair. Thus, nobody knew if he had a wife or a girlfriend.

Despite our best efforts, we couldn’t find coach Edwin Gawala’s profile on Facebook.

Had he joined the social media platforms, Edwin surely would garner tens of thousands of followers.

0 Replies to “Edwin Gawuala Bio: Now, Age, We Are The Brooklyn Saints”