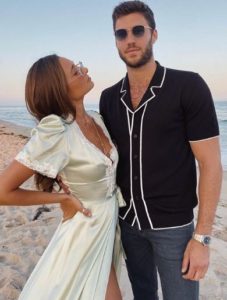 It isn’t new in a world of fashion when someone rips off ideas and brings out and promotes product fast with their abundant resources. And mostly, indie businesses fall victim to the large corporate fashion giants in this regard and get away with it.

Social media influencer, blogger, and fashion designer Danielle Bernstein once again found herself in the same position on an arm wrestle with Williamsburg Lingerie Shop. She was accused of stealing custom made nude drawings which the company made hiring professionals.

In early-Sept 2020, Danielle shared she tested positive for COVID-19. At the time, the socialite didn’t reveal how she contratced it. Nonetheless, some slammed her for “gallivanting in the Hamptons.”

Delve into this wiki-article to learn more about Danielle Bernstein and her propelling career into the fashion industry.

Danielle L Bernstein was born to her anonymous businessman father and her mother in Great Neck, New York. Being born into wealth, she never had to struggle to make ends meet. But she felt that the same comfort zone made her insecure to take larger strides in her life.

She also mentioned on several interviews turning towards her father for any business advice. As it turned out, her parents are divorced and she mentioned it all as an anecdote in her book.

Besides that, no other information on her parents made it to the public records or on social media.

Moreover, she follows a routined healthy diet which helped maintain her attractive measurements of 34-25-35 inches. Her social media pages supported the fact that she is not the one to shy away from flaunting her stunning beauty to generate more followers.

In an interview with fashionweekdaily.com Danielle noted she always loved shopping. She had a nice upbringing. Which meant, she didn’t have to think twice to splurge on the shoes and clothes she desired.

Danielle attended the University of Wisconsin and majored in retail. However, she believed if she was ever going to establish a viable career in fashion she needed to move out to the city.

Which is why Danielle transferred to FIT in her sophomore year. Right about that time, she took her first step towards her dream by starting a blog now known as WeWoreWhat.

As she was influenced by the people around her on the campus, Danielle decided to pick a camera and trained herself to use it. Danielle placed herself in front of the lenses and started creating a personal fashion blog.

Following that, Danielle earned recognition for her blog and soon after landed a contract with Next Model Management. Not long after that, she attracted contracts and went on to land deals with several fashion labels.

As Instagram was on a rise, she started getting active on that platform. Slowly, the platform went on to earn her thousands of followers defining her reach on people. As of the time of this writing, her Instagram account boasted a total of 2.5 million followers.

Danielle launched many products under the brand, named after her blog. She used her reach on social media in order to market her product rather than reaching out to retailers to market them.

But like most celebrities, Danielle couldn’t save herself from controversies regarding her business strategies. Several accusations were made against her, and the most common was she stole ideas from indie businesses.

In 2020, Danielle had to face criticism regarding stealing Williamsburg lingerie designs. She reportedly ripped off the nude pattern on the lingerie of Williamsburg made by art director Marta Caro and artist Kristen Giorgi.

Whereas, Danielle broke her silence against the accusation stating it as “false and unwarranted”. Because of the same controversy, a feud between Danielle and the fashion industry watchdog Diet Prada ignited.

Besides fashion, Danielle also published a book titled This is Not a Fashion Story: Taking Chances, Breaking Rules, And Being Boss In The Big City. The book unlocked gritty details on her life as a teenager turned one of the first and the greatest fashion influencer.

Getting into her relationship, Danielle Bernstein has been dating for a while. In a period of 10 years since she started her business, Danielle claimed of having four boyfriends. To everyone’s dismay, she prevented herself from revealing the names of most.

In 2016, Danielle was dating Aaron Baum. The relationship between the two ended soon after without any heads up on the reason behind it.

As Danielle strictly avoided sharing details on her boyfriend she dated as of Sept of 2020, some of her fans accused her of pretending her boyfriend was an exclusive material.

Plus, Danielle faced criticisms on Reddit for being private about her significant other as if he was some kind of celebrity.

Needless to say, Danielle Bernstein wasn’t a married man and therefore hadn’t acquired a husband [as of Sept 2020].