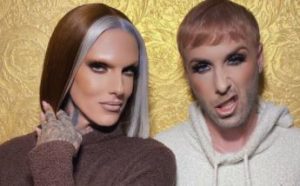 In April 2021, Jeffree Star got into a car accident in Wyoming. Accompanying him in the vehicle was Daniel Lucas.

This Daniel Lucas Bio reveals unmissable facts about Jeffree Star’s rumored boyfriend such as his age and job. Similarly, it sheds light on his Instagram, tattoos, and health update.

The simple answer is No. As of 2021, Daniel Lucas doesn’t seem to reach the status of Jeffree Star’s boyfriend. At best, they were great friends.

In 2020, Jeffree revealed he was single and not dating anyone at the time. In his own words— “I am not dating anyone. I am hanging out with someone, but we are not serious at all and I’m just f—–g enjoying my quarantine time.”

Barely a month after claiming singlehood, in August 2020, Jeffree shared a steamy picture with a mystery man. Internet sleuths later figured out her new love interest was Andre Marhold.

Jeffree’s new romance with Andre arrived with qualms. Andre, a basketball athlete playing in Europe, reportedly his partner, Mia Tookes for Jeffree. Mia even pleaded with Andre to come back.

Some grave allegations followed when people online Jeffree of paying Andre to be his boyfriend. Nonetheless, the whirlwind romance didn’t last long. Before everyone knew it, Jeffree was romantically linked with singer/songwriter, Sean van der Wilt.

On 16th April 2021, Daniel Lucas and Jeffree Star got into an accident. Hours later, the YouTuber confirmed it.

Tweeting from the hospital bed, Jeffree shared a photo of them holding hands. He also wrote— “A few hours ago Jeffree and Daniel were in a severe car accident and the car flipped 3 times after hitting black ice. We will update you all when the doctor gives us more info. So thankful they are both alive.”

In a follow-up tweet, the famed makeup guru shared— “This morning was one of the scariest moments of our entire lives. I’m so grateful to be here still. I’m in excruciating pain because part of my back is broken and I have vertebrae fractures on my spine. My doctor said it will take a few months but I should make a full recovery.”

Providing a health update on Daniel Lucas, Jeffree tweeted— “My best friend Daniel has internal injuries and because he has survived colon cancer three times, he’s having complications with his organs and they’re monitoring him 24/7. We’ll know more soon. Thank you to every single person checking on us.”

Daniel Lucas celebrates his birthday on 24th November. Thus, he was born a Sagittarius. As for his age, he couldn’t be more than 35 years old in 2021.

Daniel Lucas hails from either Sacramento or San Francisco. Thus, his hometown is one of the two cities in California.

Moreover, Daniel owns the features of a Caucasian man. Reportedly, his real name is Daniel Oxford.

Daniel Lucas stands only an inch or two taller than Jeffree Star. In other words, Daniel measures at least 6’2” in height.

Although Daniel may not possess as many tattoos as Jeffree, he surely has multiple inks on his body.

Talking about his job, Daniel Lucas is pop star Britney Spear’s former Merchandise Associate. He even specifically moved to Las Vegas from Los Angeles to work for the singer.

During Britney’s “Pieces of Me” shows, he worked for Araca Merchandise, selling accessories and clothing at the concerts.

In his Feb 2021, Daniel spoke to The Sun and claimed Britney’s father, Jamie growled at her sons and acted as a commander. He even labeled Jamie “scary”.

Bad times fell upon Daniel when he was diagnosed with Stage 3C Colon Cancer. He even launched a GoFundMe campaign in December 2020 to pay for his medical supplies and food. To make matter worse, he had also gotten into an accident. The GoFundMe, as of April 2021, had collected $2.2K, far lower than the intended goal of $10K.

You can assist Daniel by purchasing good off his Amazon wishlist.