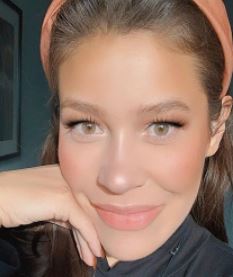 Intrigued by the Critics Choice Super Awards 2021’s co-host Dani Fernandez? Well, you have come to the right place.

The event as described by a CW press release honored “most popular, fan-obsessed genres across both television and movies, including Superhero, Science Fiction/Fantasy, Horror, and Action and Animation.” And hyping the fans even more Dani appeared in her “80s cyberpunk girl” outfit alongside her co-host Kevin Smith.

Delve into her world through this wiki.

Corresponding to her birthday, Dani is of the Gemini zodiac.

Fun Fact: Governmental places think that her birth certificate is fake. She even had to get a new one because they thought her old one was a counterfeit. Though her last name “Fernandez” wasn’t that uncommon, it might have something to do with her origin. Dani also speaks out for other immigrant detainees and the inhumane treatment towards them.

Dani Fernandez is a Chicana (of Mexican-American ethnicity). She spent most of her early life bouncing between Southern California and Texas; one of which could be her hometown.

As for her family, Dani shared that her parents and elder brother were “super religious” and “very Catholic”. She added that “there’s an understanding that you kind of pray depression away” (which she didn’t believe). According to her, she is “very spiritual” but not religious.

Also, Dani mentioned that many members of her family members served the country including her grandfather, Fernando Fernandez.

Trivia: Dani has a cute little nephew whom she once labeled as her “emotional support baby.“

In light of her education, Dani graduated from the University of Texas.

As a TV writer and actress Dani Fernandez garnered a net worth of over $300 thousand in 2021. She was represented by “zerogravitymanagement” then.

If you are a fan of Nerdificent, then you should have her over their podcast. She co-hosted the show from 2018 to 2020 alongside Ify Nwadiwe.

Circa 2020, Dani was all set to star in HBO Max’s 1% Happy (that she wrote and executive-produced). The show was inspired by Dani’s real-life story about the time she was in a dark period in her life. According to her,

“It’s about second chances. It’s about finding hope in the times when it just feels like you’re in a pit that you can’t get out of. That’s how I felt and that’s why I wrote it.”

Dani Fernandez is openly bisexual. However, she could only open to her family at the age of 30 (in 2019). She thanked “Black and Brown trans women who put their lives on the line to fight for the entire LGBTQ+ community” for giving her the courage “to be openly Bi.”

She shared her perspective on bisexuality as,

“You can be bi and still date someone of the opposite sex and still be bi.”

Talking about her past relationships, Dani was once a married woman. She was just 25 when she when through a divorce or according to her “a really dark period” of her life. Dani confessed that unable to bear the pain she even attempted suicide.

It was after that Dani moved to Los Angeles to pursue a career in writing and make a name for herself.

Now, Dani is back to the dating game. However, she is very careful about her partner and mentioned that she had “standards”. She regularly posted thirst traps over her Instagram and wasn’t afraid to call herself a “pro thirst trap.”

Her ideal dating partner would be someone who liked her “exactly the way she was.”