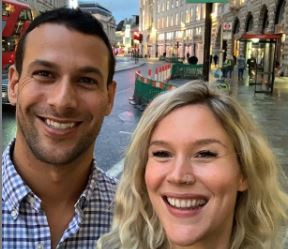 Joss Stone and Cody DaLuz shared they had welcomed their daughter, Violet Melissa DaLuz in February 2021. Via Facebook, the couple delivered the baby news. According to Joss, she underwent a c-section because their baby was breech.

In October 2020, Joss seemed happy as she announced her first pregnancy after “four or five” months of trying. She shared how “heartbreaking” the process was, wishing each day that she might have conceived.

But, Joss had her boyfriend, Cody to share her anxiety and help her “stay positive”. When Joss felt like maybe she couldn’t get pregnant, Cody always reassured her. He shared— “I always told her I didn’t care how long it takes. I said it will happen.”

Here is everything you need to know about Joss’s baby father, Cody DaLuz.

According to “mylife.com”, Cody DaLuz was 31 years of age in 2020. He celebrates his birthday on April 20 and is of the Taurus zodiac.

Apart from the above-mentioned names, our sources reported that Cody DaLuz’s family also included: Trish Nugent; who is his mother, Alexis Manning Daluz; his sister, and Tyler; his brother.

Talking about his early life, Cody was raised in his hometown North Kingstown, Rhode Island. He had a passion for traveling and thus he chose a job that let him experience places he’s never been. Also, Cody shared how the path he chose for himself changed his view of the world throughout time.

Likewise, Cody has traveled to places like Dubai, Greece, Switzerland, and many more.

As for his nationality, Cody is American.

Mentioning his distinct features, Cody is a charming man with an intimidating body stature. Also, he has dark eyes and a beautiful smile.

As of October 2020, Cody entertained 872 followers on Instagram @daluzer7. His bio stated,

“Don’t listen to what they say. Go see”

A good piece of advice indeed.

Cody DaLuz is an extremely hardworking person, at least that’s what his friends say.

For his job, Cody chose to enroll in the Marines and Military Contracting. His colleagues and seniors vouched for him to be diligent as they have seen him work straight for weeks with no breaks.

On Jan 28, 2019, Cody uploaded a picture of his Military friends and himself shared that he missed them. So, as of 2020, it wasn’t clear if Cody was still enlisted or just worked contracting.

Information on his education wasn’t shared.

Cody DaLuz and his girlfriend, Joss Stone were 17 weeks pregnant as of October 10, 2020.

Joss shared that during her early 3 months, she was sick all the time and feared the delivery. She added,

‘Oh my God, I’m really scared!’ I just got really terrified of having to push it out.”

But Joss, as positive as he is, reminded her that the “pain was temporary”.

Reportedly, their baby was due in March 2021. However, Violet Melissa DaLuz arrived a month earlier in February.

As for their dating history, they didn’t share how they first met and fell in love. However, Joss first appeared on Cody’s Instagram in September 2020. He shared a picture of them captioned,

“Hardest working and most beautiful, I love every minute with you.”

Also, Cody was first seen in Joss’s Instagram doing the “Accent Wars”. They were joking about how they had their different accent saying “Mashed Potatoes”.

Cody and Joss didn’t have any wedding plans as of 2021. Maybe they were enjoying the arrival of their baby. Moreover, they had yet to be engaged then.