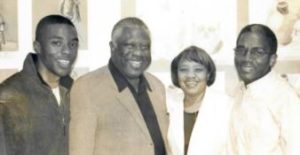 The statement posted on his Instagram read, “It is with immeasurable grief that we confirm the passing of Chadwick Boseman”.

“It was the honor of his life to bring King T’Challa to life in Black Panther,” the statement continued.

As per the statement, Chadwick never spoke about his diagnosis on public platforms. While undergoing treatment, the actor continued to excel in his career.

First, Chadwick starred as NAACP Lawyer Thurgood Marshall in the 2017 flick “Mashall”. A year later, he starred the titular character in “Black Panther” — a role announced in Oct. 2014. According to Variety, the film grossed more than $1.3 billion worldwide. The talented actor would also star in “Captain America: Civil War.”

Before Marvel Studios garnered him international fame, Chadwick played iconic African-American figures like James Brown in “Get on Up” and Jackie Brown in “42”.

In 2020, Chadwick starred in Spike Lee-directed movie “Da 5 Bloods”. Later the year, he was expected to appear in “Ma Rainey’s Black Bottom.”

While Leroy worked in the textile factory and later owned an upholstery business, Carolyn was a nurse. They both owned African American heritage and held American nationality.

A native of South Carolina, Chadwick Boseman took a DNA test after wanting to learn about his ancestry. From it, the actor learned he was of West African descent. Furthermore, Chadwick discovered his parents and their ancestors hailed from the Yoruba people of Nigeria, the Mende and Limba people of Sierra Leone, and the Jola people from Guinea-Bissau.

According to Chadwick, his parents were very protective of him. Oh, there was a time when his dad stopped him filming a scene. In his own words,

“My dad, when we were shooting 42. There was a scene we were doing, we were stealing home and I had to jump over the catcher and slide. And we did it like 15 times. He’s sitting right by the director and fuming. He’s like, ‘You can’t do that no more, you can’t do that, you’re gonna be hurting in your body.’ He said it to me and the director. Bryan Helgeland, he comes over and says, ‘I think we’re done. You’re dad said you can’t do it anymore.'”

Chadwick admired his father’s work ethic. In 2020, he told The New York Times — “I saw him work a lot of third shifts, a lot of night shifts. Whenever I work a particularly hard week, I think of him.”

Besides his own dad, actor Denzel Washington was also a fatherly-figure to Chadwick Boseman.

As a Howard University student, Chadwick got accepted into Oxford University. However, after learning about the cost of attendance, he was on the verge of letting the opportunity pass.

At last, respite arrived after Phylicia Rashad — one of his acting teachers — reached out to her celebrity friends to get the funding for Chadwick. Denzel was one of the stars who helped out.

Derrick Boseman, the eldest of the bunch, began working as a preacher in Tennessee at some point.

Like Chadwick, his other brother also worked in the showbiz. A respected dancer, Kevin Boseman has shared stages with Alvin Ailey and Martha Graham Troupes. What’s more, Kevin also toured with the stage adaptation of “The Lion King.”

Delving more into the actor’s family: Chadwick Boseman came from a huge family.

According to Chadwick, when her grandmother passed away, she was survived by an astounding 115 grandchildren & great-grandchildren.

For Chadwick, his family was very important. Also, he was very close to them.