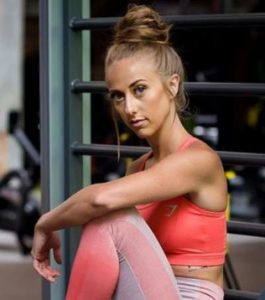 Another baby news in town! Kansas City Chiefs quarterback Patrick Mahomes and his fiancée Brittany Matthews took to their Instagram, the most exciting news of their life. On 30th September in 2020, they announced that they are expecting their first child. February next year, the couple became parents for the first time.

Tune and know more. All along also discover everything about Brittany Matthews.

Brittany grew up celebrating her birthday every year on the 1st of September. Based on the very fact, one can say her zodiac sign is Virgo. And, on the same day in 2020, she turned 25 years of age.

Brittany Matthews was born and raised in Tyler, Texas, in the United States. Regarding her ethnicity, she inherited Caucasian heritage from her folks.

Her parents, separated over a divorce when she was still a kid. Nevertheless, both her parents never escaped from contributing to her life.

She is very close to her father who goes around with the name Martin Scott Matthews. As of the time of this writing, her father lived in Dallas, Texas continuing to work as a healthcare professional. He graduated from the University of Texas, where he studied Accounting. According to his Twitter, he is in a relationship with some lady, probably his wife.

While Brittany’s mother, Diana Massey, lived in Whitehouse, Texas. She went to the same university as Brittany’s dad and now earned her living as a physical therapist assistant. She has two kids Brittany and her sibling Devin. And, the father of both her children is Martin. Later, she remarried a man named Paul Massey. Unfortunately, he passed away following a stroke while he was attending one of Patrick Mahomes’s games back in November 2018.

Brittany Matthews stands to a height of 5 feet and 5 inches. Also most lately, her weight was listed under 53 Kgs, and she had a 33-24-35 (inches) measurement.

Brittany was on Instagram with 973K followers (until 21st February in 2021). Here, she shares fitness-related content including workout videos and exercise techniques. More to it, the social media influencer is also known for her work in Fit Fashion, the shots from which she puts on the platform for her people to see, regularly. Further, she enjoyed 21K and 201.9K followers respectively on Facebook and Twitter.

Not to mention, the “dog mom” also owned a separate Instagram account called ‘Steel & Silver’ where she snaps of her two dogs.

For her education, Brittany Matthews earned herself a degree in Kinesiology from the University of Texas. At some time before, she used to play soccer professionally in Iceland. Eventually, she transformed her passion for sports into her job as a fitness trainer.

Her online programs under the name ‘Brittany Lynne Fitness’ are available on www.brittanylynnefitness.com.

As a health and fitness expert, she gives workout and nutrition guidelines to those interested.

Her online programs comprise options for working out at home or in the gym, allowing one to choose wherever they feel comfortable.

Her online training programs, TRAIN with BRITT, BOOTY by BRITT, and HIIT with BRITT sell at $60, $30, and $40 respectively.

Sometime before 2019, she became a certified fitness trainer, and in 2019, she launched her website Brittany Lynne Fitness.

And today, Brittany Matthews reported somewhere around $1 million from her prolonged and dedicated work.

Brittany Matthews and Patrick Mahomes met for the first time in high school in Whitehouse, Texas. And so, the pair have been dating since they were 10th graders.

However, the two took some long years before taking their relationship to another level.

After high school, Patrick went to Texas Tech to play college football and baseball. Even after, they continued seeing one other, despite the long-distance separating them.

In 2017, Patrick moved to Kansas City after being selected by the team in the first round of the year’s NFL Draft. Eventually, Britanny too moved into the city to be with her beau.

Later in 2019, the high school sweethearts bought a $1.925 million home in Kanas City. And a year forward, on the 9th, in September 2020, Patrick popped the big question inside a suite at Arrowhead Stadium.

And until, the engaged duo who were impatiently waiting for the arrival of their baby, already had been parenting their baby-like dogs Steel and Silver. 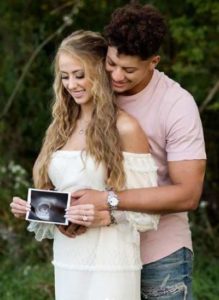 Brittany posted the sonogram of their baby and wrote, “Mom & Dad, taking a small detour to the wedding❤️”. And left it as such, on a mystery-filled note, with no cues on their roundabout route to being bride and groom.

All been said, maybe, the certified trainer and the son of Major League baseball pitcher Pat Mahomes wanted to devour their moment as a mother and father before they become wife and husband.