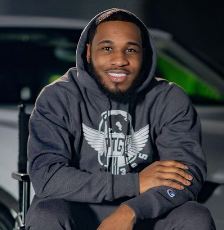 Reality star Alexis Skyy has a daughter and the father of that child is co-founder of PTG365, Brandon Medford. She made multiple allegations against Brandon that also includes her daughter.

Learn more about the man himself with this Brandon Medford Wiki that explores his age and net worth.

Brandon Medford was 28 years old as of March 2021. But, he never spared details on the precise date of his birth. This is why details related to his birthday and his zodiac remain a mystery.

Brandon Medford was born to his anonymous parents in his hometown of New York, the United States. Among the things that Brandon doesn’t entertain much is opening up about personal life. While his story has been told and re-told on several news outlets, none of them covered information on his family members.

Talking about education, he attended Richmond Hill High School. After graduation, he enrolled at Baruch College in 2010. Brandon majored in Finance in the two years period while he was in college.

Among all the three social media followers, Brandon Medford’s Instagram garnered the most number of followers. The platform earned 189k followers in total.

Likewise, he was also on Twitter with 211 followers though the platform hadn’t been verified as of March 2021. Furthermore, Brandon is also on Facebook but hasn’t been active since June of 2020.

Brandon Medford is a lovable guy with a welcoming personality, no wonder he did very well in the business. He stands tall at a height of 5 feet 7 inches (1.70 meters). His cheerful nature and professionalism with his way of dressing up happen to be his distinct features.

From the clothes and jewelry he puts on, everything speaks volumes about his personality.

Brandon Medford started his career after joining City World Hyundai in March of 2016. He worked as Finance Director for the company for almost a year. During that period, he oversaw a team of 4 finance managers where he structured all the deals for the store. He built a relationship with the sub-prime leaders.

Following that, Brandon joined Honda of Downtown Los Angeles after quitting from Hyundai. He moved from New York to LA to watch over five car dealerships. During the 9 months in the company, he played a key role for the company to make a million-dollar per month.

Every startup has a story and PTG365’s goes like this. He had a meeting with two friends from New York who came to LA for vacation. Then their meeting changed their life. By the end of the meeting, all three came to the same conclusion that they were wasting their talent working for car companies and they need to do their own stuff.

A month after the meeting, all three quit their job and Brandon moved to New York where they started PTG365. When they started they had nothing but their talent, time, and labor. But in two years of running the company, they established over 3 locations including New York, Miami, and Los Angeles.

Not only that, but the men also made it to a few printed publications including Forbes, Black Enterprises, Enterprises, and Essence. On top of that, the PTG365 owners also signed deals for shows with Netflix and Snapchat TV.

The company is grossing in multi-million revenue that contributes to his net worth. Some of the lists of their clients include Meek Mill, Rich the Kid, A Boogie, Tay Sweat, Juelz Santana, Justin Owens, Lil Mosey, and several others.

On top of that, Brandon also co-founded Dealer Innovations. in June of 2019. The company aims to give customers of auto retails a new digital experience. He trained and managed salesmen that establish connections with potential partners.

To talk about his net worth, Brandon Medford accumulated almost $1 million.

As Alexis Skyy claimed, Brandon Medford is the father of her daughter Alaiya. Alaiya was born in January of 2018, three months before, and was diagnosed with Hydrocephalus. Brandon addressed him finding out the paternity on an episode of KitchenTalkThePodcast.

One of the hosts from the podcast asked why did Alexis Skyy take too long to ask him to take the paternity test. He just replied that he didn’t know. Whereas, Alexis claimed she had asked him to take the test two years before.

Plus, Alexi claimed that Brandon contributed nothing to their kid financially, and has been absent. He also missed a party and chose to be in Miami. Plus, he didn’t call his daughter. As Alexis told, when Brandon wanted to be a part of the family, she denied him the chance to be in a relationship.

It caused the spiteful behavior of Brandon and strange himself. Plus, Alexis claimed Brandon tried controlling her and she also became a victim of domestic abuse. But since she didn’t report any of it, it could all just be a rumor.