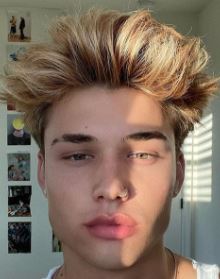 Read more about Brady Potter in the article below. Also, know about his dating life and family.

Brady was born on 14 April 2000. Born at the turn of the century, Brady turned 20 years of age very recently.

Brady was born in his hometown of Crystal Lake, Illinois. His ethnic background was white Caucasian.

As of now, Brady had not shared any information about his parents. However, he had indeed shared much about his twin sister Skylar Potter. Unlike Brady his sister, Skylar was not a social media personality. She was stylish though and had a sense of fashion.

Brady was a guy of average height and stood at a decent height of 5 ft 9 inches. The information about Brady’s bodyweight was not available.

Talking about his distinct features, Brady had a mess of curly hair on top of his head. Furthermore, he had a sharp jawline and pointed chin. Brady also had a well-toned body with six-pack abs.

Brady was primarily an Instagram celebrity. With 118 posts, he had earned over 620k followers. Most of his posts were solo photos of his own, with a few of his photos with his boyfriend thrown in the mix.

Similarly, on Tiktok, he had an unbelievable number of followers, 1.9 million. He also had 28.4 million likes on his profile. On his Youtube channel, he had over 650k subscribers. Most of his Tiktok and Youtube videos were about him and his friends doing some weird things.

Now about the lesser platforms. On Twitter, Brady had just 33.3k followers. At least, on Twitter, Brady was active. On Facebook, he was probably the least active, with only his profile picture (changed in 2018) on his timeline.

Based on the number of his subscribers, and video views (953k views in the month of October 2020), Youtube paid him annual earnings that ranged from 3k – 45k. Brady also endorsed brands like Handmade Custom Art, Drip Creationz, and his boyfriend’s own brand, girliesxo.

Furthermore, Brady also had his own merchandise, like Brady Potter Pullover Sweatshirt. That particular merch cost $38.40 per piece.

From all the sources, Brady had earned a current net worth of $300 thousand.

Currently, Brady Potter was dating a fellow Youtube star called Larray. When he started dating, questions arose about Brady’s sexuality and he revealed that he was bisexual. He came out on Instagram first, in a very casual way, and then made a six-minute video on his Youtube channel talking about his sexuality.

Anyway, Brady and Larray met in 2019 and started dating in February 2019. In one video (dated 28 May 2020), Larray described how they met each other. Apparently, they met at a party. And initially, Larray thought Brady was straight. But after finding out that Brady was not, he pursued Brady, and soon they were dating each other.

Larray made his first appearance in Brady’s IG in July 2019. Since then, Larray had regularly appeared on Brady’s IG and also collaborated with him in many Youtube and Tiktok videos. 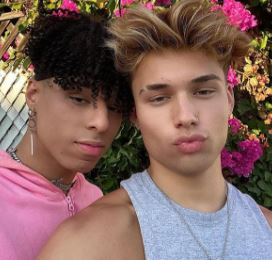 Thus, for now, all fans could do is wait and pray that they do get married.