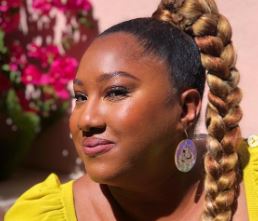 One of the four “A Black Lady Sketch Show” inaugural season’s cast, Ashley Nicole Black was back for its second installment on HBO. Unlike her co-star Quinta Brunson, Ashley stayed with us the second season to flood us with her whimsical jokes.

So, who is she? What was her private life like? Does she have a boyfriend or is she married? Stay with us till the end to find out all the answers.

Raised in Los Angeles, Ashley Nicole Black comes from a family of six. She has three siblings — two brothers and a 2-year-younger sister named Amber (who worked as a School Psychologist and Wellness Consultant.)

As for her parents, Ashley’s mother Demetra Willis turned 60 on May 10, 2020, while her father John was still making the “best sandwiches” and “striking fear in the hearts of mean teachers everywhere.”

Growing up, Ashley always was a humorous person. Even when she yelled at her parents, she recalled that “they would laugh” instead. They have always accepted that Ashley was a comedian, and that was why even when Ashley was deep into a Ph.D. program at Northwestern University, her parents bought her a package of improv classes at The Second City. And the rest is history.

Ashley shared that she was always influenced by Paul Mooney and Shonda Rhimes; and idolized Camryn Manheim and Gina Torres, Ashley.

Being a plus-size woman, Ashley believed that when ur big “people love to tell you what you can’t do”. And this was the reason why she gave someone else her Twitter password after appearing for the first time on Full Frontal with Samantha Bee in 2016. She shared that she was so sure that all the comments on that segment would just be about her weight, which she didn’t like to read.

Ashley Nicole Black’s net worth was under $1 million in 2021.

Talking about her career, Ashley graduated from the UCSC majoring in theatre and delivering a commencement speech before she left in 2007. Later, she then joined Northwestern University, dropped out of their Ph.D. program, and started working as a teacher at The Second City in Chicago.

In 2014, she first appeared on TV on a short clip The White Bag, and the TV movie An American Education. Moving to New York in 2016 (after being hired to write for the TBS late-night show Full Frontal with Samantha Bee), Ashley then stepped into the major limelight.

Her popularity even got her an Emmy in 2017 for Outstanding Writing for a Variety Special for Full Frontal With Samantha Bee Presents Not The White House Correspondents’ Dinner.

Ashley Nicole Black Husband, Boyfriend: Is She Married Or Dating?

Ashley Nicole Black isn’t your average star who’d let you know directly if she was married or dating. According to her, comedy is sort of her “natural reaction to her personal feelings”. So, she believed that her “way of expressing would make people laugh,” although it did have some partial feelings mixed in it.

Back in 2016, Ashley shared an interview with “Complex” and hinted that even “if she was in a relationship and trying to express to her boyfriend that they’ve hurt her feelings, he would just laugh.” She added, “I guess I’m lucky I don’t have to overcome my feelings to make comedy. Me having feelings makes other humans laugh.”

Could this be her way to let us know about the irony of being a natural comedian in a relationship?

But looking at her socials, it doesn’t seem that Ashley Nicole Black had a husband or a boyfriend as of 2021. After spending the quarantine 2020 all alone, working from home, Ashley tweeted on Valentine’s day 2021,

“Shout out to everyone who’s spent the pandemic wfh and quarantined literally alone for almost a year only to still get asked if you’re dating anyone. Happy Valentines Day!”

Although Ashley might be single, she seemed ready to have a husband or at least become one. If you follow her on Twitter then you might have seen Ashley replying to Kristen Bartlett and Amanda Deibert, wanting to become their husband.

As for her male preferences, Ashley has already made it clear that her boyfriend should compare with “the falcon and the winter soldier”. Or he can just be a guy at Starbucks drive-thru, asking the right question. On Match 2021, she tweeted,

“The guy at the Starbucks drive-thru just asked if I was getting coffee to do “my homework” and anyway, I’m married now.”

Previous: Eleanor Neale Wiki: Age, Dating Status, Where Is She From?
Next: Tamisha Iman Wife, Partner, Net Worth, Height, Kids