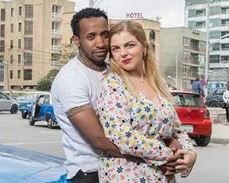 “90 Day Fiance: The Other Way” Season 2 premiered in early-June 2020. Among the 12 individuals (6 couples) featured in the show, Ariela Weinberg surely was the most entertaining.

Continue reading and learn more about Ariela’s wiki including her job, birthday, weight loss, and height. Moreover, discover if she stayed with Briniyam Shibre or not!

Ariela’s precise date of birth, however, remained a private affair. The same rang true for her birthday and zodiac.

“90 Day Fiance” star Ariela Weinberg was born to American parents. Per a report by intouchweekly.com, her father owned a cardiology practice.

About her mother, Ariela admired her. In many ways, she inherited the love for travel from her mom. Moreover, Ariela penned an anecdote that involved the two in June 2020 via Instagram. In her words:

“I love that the episode featured this pic of my mom and I traveling together through Argentina! The adventure of a lifetime. We rented a car in La Plata and drove north. We visited Paraguay and Brazil, and then circled back through other northern provinces and back to Buenos Aires.”

On her IG, Ariela mentioned her two nephews. Conclusively, she grew up alongside two big sisters named Kristin and Adele.

As witnessed on “90 Day Fiance: The Other Way,” Ariela’s family didn’t fancy her relationship with Biniyam. What’s more, they even suggested Biniyam was using her to acquire the green card.

Ariela’s grandparents — Emanuel Weinberg and Fannie Blatstein — from her father’s side fled the prosecution from the Russian regime in the early 19th Century. They then resettled in New York.

Despite the “90 Day Fiance” fame, Ariela garnered under 2 thousand followers [as of 20th June 2020). At the same time, she didn’t seem active on FB and the social media giant Twitter.

From what the fans could gather, “90 Day Fiance” sensation Ariela Weinberg seemed to boast a college degree. College-educated or not, she excelled at her job as a writer.

Beyond her life as a writer, Ariela admittedly loved her experience as a world traveler and an explorer. For two years in her late teens, she traveled and lived in Argentina.

When not exploring the world and writing, Ariela Weinberg held a part-time job at her dad’s cardiology practice. From the stated gigs and the tenure as a reality star, she allegedly had under $0.25 million in net worth.

Ariela Weinberg met dancer and gymnast Biniyam Shibre during her trip to Ethiopia. Recounting their first encounter, she shared:

“I was waiting for a taxi outside a local hotel and I saw a very attractive guy. I yelled out, ‘Don’t I know you from somewhere?’ and it actually worked.”

Despite falling for Biniyam’s charms, Ariela wasn’t looking for a serious relationship. Going against her intuition, she finally caved in and began dating the Ethiopian hunk.

Three months into their life as boyfriend and girlfriend, Ariela became pregnant. For prenatal care, she flew back to the United States.

Ariela and Biniyam then agreed to have their baby in Ethiopia. Upon returning to the African country, she expressed her concern over the quality of labor/delivery care there.

Between 2008 and 2018, Ariela Weinberg was married to Leandro — a man she had met in Argentina.

Because she wanted Leandro to come to the US, she married him. Only after Leandro became her husband, he was allowed the entry to the country.

Ariela described her former husband “best friend”. However, over time, the initial marital bliss fizzled out. 7 years into their marriage, they had enough of one another and separated.

Talking about her failed marriage, Ariela once shared:

“I was young and immature and I definitely rushed into a responsibility that I wasn’t ready for.”

Biniyam also came with baggage. Long before he successfully wooed Ariela, the Ethiopian dancer was also married to another American woman. What’s more, he and his baby mama went on to have a child.