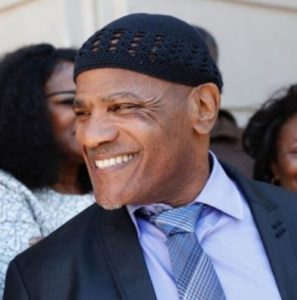 AGT has been delivering us with stories that are inspiring, enticing, and even terrifying at times. On May 26, 2020, there stood Archie Williams, at the center of the stage, sharing his incredible story to millions around the world.

“I was just incarcerated for thirty-seven years for somebody else’s crime,”

Time stood still as Archie’s melancholic voice echoed the hall. Though he knew he was innocent, being a “poor-black-kid”, he didn’t have economic ability to fight the court.

Divulge into the world of Archie Williams we take you through this wiki-style article. Also, get to know about his wife, net worth, and height as the article proceeds.

It was December 9, 1982, when the crime for which Archie was wrongly incarcerated occurred — A 31-year-old woman was in her home in Baton Rouge, Louisiana when she was raped and stabbed in her chest and abdomen.

Archie Williams was called multiple times in a line-up as the woman gained consciousness. At first, she couldn’t identify the attacker but shared that there was a person in one of the lineups that strongly resembled her attacker.

Later, she picked 22-year-old Archie in the line-up. Despite her being — only about 70 percent sure, Archie’s alibi that he was not at the crime scene, and fingerprints found in the bedroom not belonging to him, Archie was convicted.

On April 21, 1983, the jury convicted Archie of “attempted murder, aggravated rape, and aggravated battery”. And without the possibility of parole, he was sentenced to life.

While in prison, he knew that his only hope was “The Innocence Project” and kept writing to them for 11 long years. Finally, in 1995, the project in New York began re-examining his case and in 1996 filed a motion for DNA testing.

Despite the plead getting denied, it was not until 2007 that an appeals court ordered the testing to finally be done. However, the test results weren’t enough and things went back to square one.

In 2014, a more powerful system for comparing fingerprints called the Next Generation Identification (NGI) arrived and the crime-scene fingerprints matched another man called Forbes.

So, on March 21, 2019, all the charges were dismissed and Archie was released receiving a state apology.

Archie Williams was 59 years of age as he appeared on America’s Got Talent 2020. Information on his birthday and zodiac is soon to be updated.

Being sent to an infamously brutal prison Louisiana State Penitentiary, Archie found solace in singing. He stated a gospel band in prison and was able to nourish his talent there. He added,

“You had the choice to be either strong or weak, because you will be tried, and tested. I went to prison but I never let my mind go to prison”

Taking about his family, it was Archie’s aunt Saundra Christmas, who sat through his original trial and has advocated for her nephew for those 37 years. Also, supporting him were his siblings (sisters), Charlotte Alexander and Sheila Varner; his nieces LaShanda Martin and Tina Trice; and his cousins Ninon Soto and Jonathan Foster.

As for his parents, his mother testified that he was at home asleep at the time the attack occurred. Information on his father is unknown.

Coming to his distinct features, Archie Williams is a handsome man. He loved to shave his head shiny and has a beautiful set of teeth.

Also, on December 15, 1982, while his alleged victim who was 5 feet 7 inches tall, said her attacker was 5 feet 9 to 5 feet 11 inches tall. This should have added to Archie’s defense too.

As of July 2020, Archie’s popularity was on the rise over social media. He had over 30k followers on his Instagram @archiewilliamsofficial and over 62K followers on his Facebook @Archie Williams. Also, he was planning to have an account over twitter soon.

As for his AGT journey, Archie Williams had the judges and audience in tears as he sang his soulful rendition of “Don’t Let the Sun Go Down on Me” by Elton John. Moreover, Simon was so impressed that he mentioned that he would never listen to the song, in the same way, ever again.

Furthermore, Archie revealed that following his audition he received a phone call from Elton John inviting him to perform at Elton’s show. He added,

“Out of all the people that ever sung his song, that song there, he said I brought true meaning to it even with him. He started crying at the time he was talking.”

Also, Elton even tweeted about Archie comparing him to Nelson Mandel.

While he had no job as of July 2020, Archie received countless donations that he was thankful for. Also, he was invited to the Steve Harvey Show where he received a $5,000 check from My Magic Mud.

As for his net worth, Archie Williams eligible for the lowest total of $250 thousand under Louisiana’s compensation law.  That makes it around $300 thousand in 2020.

While there was no information on his wife and kids, we can’t even say for sure that he was ever married. Being incarcerated at 22, Archie Williams might have never had a chance to tie the knot.

So, is Archie looking for a wife to settle down?

While there was a report that he “sexually harassed” Lovely Peaches (Brittany Johnson), it wasn’t confirmed that the man on the video is Archie Williams.

As Lovely Peaches had her fair share of controversies, this might only be a way for her to gain attention. It’s saddening that a man who was wrongly incarcerated for 37 years in prison, finds himself the victim of an exploitative individual.