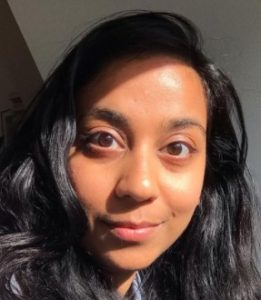 Channel 4‘s British TV sitcom We Are Lady Parts, written and directed by Nida Manzoor, features an all-female, Muslim punk rock band. The six-episode series, which premiered on May 20, 2021, revolves around the life of a geeky Ph.D. student Amina Hussain whose life turns upside down after she joins the punk rock band, Lady Parts, as a lead guitarist.

All actors have given a top-notch performance in the show, however, the one that caught most viewers’ eyes is Anjana Vasan, the actor who plays the lead Amina in the show.

Therefore, this article will be all about her. Get insights into Anjana’s age, net worth, family info, and dating life by reading this Anjana Vasan wiki article until the very end.

Though Anjana Vasan’s exact age is not available anywhere on the Internet, some reports say Anjana was no older than 26 years of age in 2021.

What we do know is that Anjana Vasan celebrates her birthday on the 31st of January every year. British-Indian screenwriter and playwright, Vinay Patel wished Anjana a very happy birthday through Twitter on January 31, 2019.

“I’m made up of three places and cultures,” Anjana Vasan told to Mogul Mowgli talking about her upbringing. Anjana was born in South India – Chennai to be precise. Her parents are Indian too.

She told, “My body is Indian, it’s my inherited DNA and like a fingerprint leaves a subtle imprint on everything I do.,” to Mogul Mowgli.

Anjana, along with her family members, relocated to Singapore when she was only 4 years old. Singapore was her home until she left the country for her further studies.

As an adult, Anjana moved to London to forge a path for her acting career. Her parents, however, remained in Singapore.

Anjana said in an interview that she has full support from her parents. Even though her parents do not understand much about acting as a profession since no one from her extended family ever pursued acting, they have never made Anjana feel discouraging.

From what we know, Anjana has a very close relationship with her parents despite being a long distance away from them. On December 31, 2017, she even uploaded vintage pictures of her mom and dad.

Coming to her physical features, Anjana Vasan stands at an average height of 5 feet 5 inches and weighs no more than 60 kilograms. Her distinctive physical characteristics would definitely be her big, bright brown eyes and dark black hair.

For an emerging actress, Anjana Vasan actually possesses a decent social media reach. As of May 2021, she could only be found on Instagram and Twitter. Anjana was active on both platforms.

After moving to London in her adulthood, Anjana joined the Royal Welsh College of Music and Drama to study acting.

She started her career out of theatre performances. Some of her theatre credits include The Radicalisation of Bradley Manning (directed by John E McGrath), Much Ado About Nothing (directed by Iqbal Khan), Behind The Beautiful Forevers (directed by Rufus Norris), Midsummer Night’s Dream (directed by Emma Rice), A Doll’s House (directed by Rachel O’ Riordan), among others.

She began her career in films through Disney‘s Cinderella. Anjana played Queens Reporter in Spider-Man: Far From Home. Her other film credits include The Children Act and Mughal Mowgli.

In the new Channel 4‘s television sitcom We Are Lady Parts, Anjana portrays the role of Amina Hussain. Talking about her character, Anjana told, “At the beginning, she’s quite strait-laced and conventional… But you soon realize she’s a bit more interesting,” to Buzzfeed.

Many people might not know but Anjana is a skilled singer-songwriter. She released her EP titled “Too Dark For Country” in 2017. Through an Instagram post made on April 9, 2021, Anjana revealed that she would be sharing a follow-up album later in 2021.

As of May 2021, we had no idea if Anjana Vasan was dating anyone. Her Instagram account definitely had no hints of her boyfriend’s identity, if she has one.

With that being said, it may also be true that Anjana wanted to keep her personal life a secret. We say that because it was unlikely for the talented and beautiful girl to have no boyfriends to date.