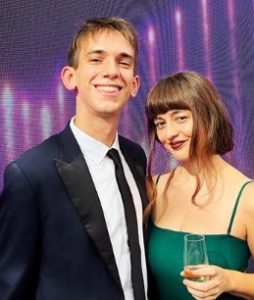 Saturday Night Live put on-board three new talents and they are set to appear in the new season. Among the three is a screenwriter and stand-up Andrew Dismukes.

Despite his young age, Andrew has had plenty of experiences in performing and writing and we’re yet to see what magic he brings to the television set. Scroll down as the wiki on Andrew unfolds giving a glimpse into his career, family, and girlfriend!

Andrew Dismukes shares his birthday every year with singer Lana Del Rey. While Lana turned 35 years old in 2020, Andrew turned 25 years old while as he was born in 1995.

Plus, he celebrates his birthday on 21 June which naturally made him a Caner by zodiac sign.

Growing up in Port Neches, Andrew shared the love of his parents with his two siblings, one of whom is his sister Leah. As an aspiring civil rights attorney, Leah attended the University of Texas at Austin.

Hailing from Port Neches, Andrew along with his siblings went to Port Neches-Groves High School. He even made it to the honor roll during his year as a middle school student.

For higher education, Andrew attended the University of Texas as he enrolled at Austin’s College of Communications. He is recognized as the alumni of the Department of Radio-TV-Film and Wofford Denius UTLA Center for Entertainment and Media Studies.

In 2017, Andrew graduated from the university with a bachelor’s degree in radio-television-film studies. However, Andrew pursued his career as a comedian long before in 2012 while he joined Moody College in Communication.

He also performed at several venues during his years in college. In his final semester, Andrew participated at UTLA at the center for media and entertainment studies. He also studies screenwriting at the university.

Later, Andrew interned in script development while he performed at several stand-up comedy-clubs.

As Andrew Dismukes walks up to the stage, the first thing that draws the people’s attention is his appearance. Moderately tall guy, with a height of 5 feet 8 inches (1.72 meters) with a lanky body, and sticking out ears, his appearance alone makes his viewers attentive.

Plus, his gapped tooth, pointy nose, and V-shaped face add further to his distinct features. He weighed 61 kilograms (134 lbs) which made him look even taller.

With almost a decade worth of career in the stand-up scene of Texas, Andrew built quite an impressive social media followings on his social networking sites. His Instagram account garnered 4567 followers at the time of this writing. Whereas, his Twitter account boasted 2751 followers at the same time.

Now into his job, Andrew Dismukes had a head start as he loved writing comedy scripts as a young kid. And his childhood passion eventually led him to study screenwriting as a college student.

As he went on performing stand-ups, his material started getting better with time. Plus, the audience feedback helped him a lot to improve his writing and performance.

In 2017, Andrew debuted in the Just For Laughs festival as a promising act to pay attention to. His talent was noticed by a professional and signed him as a client.

Andrew did his first audition in New York and he remarked about the audition saying that the process for the audition depended on sketches, character, or stand-up. He performed in front of three older panels including Lorne Michaels.

Then after the second audition, Andrew made it as one of the newest additions on SNL‘s writer’s team. He then moved to New York and his pen-work sharpened and started producing sketches at SNL.

He not only limited himself to writing but will be appearing on the upcoming seasons of SNL. And his role in Call Me Brother (2018) surely helped to make it in as a cast of SNL.

As of 2020, his net worth remains unevaluated. But, Andrew Dismukes has a long career ahead of him which eventually could make him his first $1 million.

Andrew Dismukes lost his heart to a fellow comedian named Aly Dixon. The couple started dating in August of 2016. And in 2020, Andrew and his girlfriend celebrated their four year anniversary.

Talking about Andrew’s girlfriend, Aly hailed from Boston but lives in Los Angeles to pursue her career as a comedian. She attended and graduated from Ithaca College with a bachelor’s degree in writing.

As for her career, Aly pretty much established her career in Austin’s comedy scene. This got her tractions and wide recognition which eventually landed her gigs in festivals.