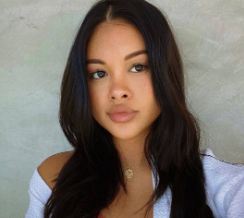 Taking to Instagram stories, Ammika had hinted about entering motherhood. She subtly wrote,

Her baby father, Chris Brown confirmed the joyous milestone by immortalizing their son’s birthdate “11-20-19” on Instagram.

With the baby news, Ammika’s on-and-off boyfriend Chris became a father of two kids. On 27th May 2014, the “No Guidance” hitmaker welcomed a daughter named Royalty with model Nia Guzman.

Back in May 2019, Ammika Harris hinted about being pregnant with now-baby daddy Chris Browns’ second child.

On her birthday, Ammika Instagrammed a photo and wrote on getting “blessed with the most beautiful gift.”

Sharing the very snap on his Instagram, Chris addressed Ammika as “momma.”

In August 2019, pregnant Ammika subtly suggested the baby’s gender as a boy via Instagram. Replying to the post, her on-and-off boyfriend Chris left a violet heart emoji. 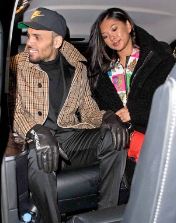 Ammika’s relationship with boyfriend-turned-baby father Chris goes as far back as to the year 2015. The duo sparked dating rumors in early-2019 but when the “With You” singer’s on-and-off girlfriend Indyamarie reentered the frame, they called it quits.

Despite the breakup, Ammika and once-husband prospect Chris maintain a cordial relationship.

Net Worth, Height Plus Measurements

With her romantic association with Chris Brown, Ammika Harris became a household name. The fame, in turn, manifested itself in massive social media following for her.

As of November 2019, Ammika owned 300k+ followers on Instagram. Paid partnership posts and earnings from modeling gigs constitute her six-digit net worth.

On 16th May 2019, Ammika turned 26 years of age. An academically gifted person, she attended the University of California, Los Angeles (UCLA).

As of November 2019, little else was known about Ammika’s family (biological parents and siblings included) and upbringing.