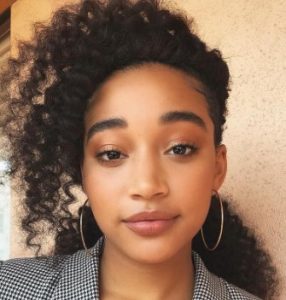 Name any profession and there’s a high chance that the actress Amandla Stenberg knows how to do it. At the age of 21, Amandla, already famous for her acting skills, authored a book and worked as a social activist. As if this was not enough, she is also a violinist.

In this article, we are gonna cover everything we know about the multitalented personality Amandla — from general wiki to dating life to net worth to her sexuality.

Amandla was born in Los Angeles on October 13, 1998, as the only child of parents, Tom Stenberg, and Karen Brailsford, a writer, and a spiritual counselor.

For siblings, she has two older half-sisters from her father’s side. Her first name ‘Amandla’ means ‘power’ in some local South-African language.

Amandla is a multi-ethnic person; she is of Afro-American as well as of Danish descent.

Amandla began her acting career at an age in which many babies began to utter some works. Aged 4, she did modeling shoots for Disney. Amandla only appeared in her first feature movie, Colombiana, in 2011, where she played Zoe Saldana’s character.

Amandla’s big break came after she was cast in the movie, The Hunger Games (2012), as Rue. Many critics praised her portrayal of Rue, and she also won the Teen Choice Award for her work in The Hunger Games.

Then, she played the lead role of Starr Carter in The Hate U Give (2018), for which she was nominated for Teen Choice Award.

Moreover, Amandla was playing the role of Julie in Netflix’s 2020 TV Show, The Eddy, directed by Oscar-winning director Damien Chazelle.

Some of her notable works in movies and TV shows are As You Are, Lemonade, Everything, and Everything, The Darkest Minds, Sleepy Hollow, Mr. Robinson, among others.

Amandla Stenberg garnered the majority of her net worth as an actor and an author. She is estimated to have a total net worth of $2 million.

There’s no denying the fact that Amandla is a very good-looking girl. Her body-built is average; Amandla’s hair and eye color are dark browns.

Amandla Stenberg stands at a height of 5 feet 3 inches (1.6 meters) with a weight of 56 kilograms. Furthermore, her measurements complement her overall build of the body.

Amandla began her career in modeling when she was only four. So, it would be fair enough to say that she knew enough people from the industry. That way, it shouldn’t be a big deal if she dated a handful of people.

However, that is not the case. Until now, she has only been linked with a couple of people, with the first being The Karate Kid’s star, Jaden Smith.

In 2015, rumors whirled around suggesting that Jaden and Amandla were secretly dating each other. It all began when Jaden took Amandla as his partner on his high-school prom night. However, that was that — none of them ever confirmed the rumor. 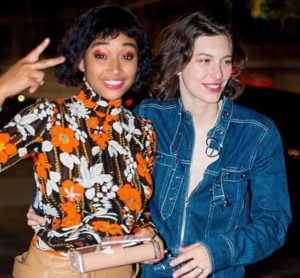 Around the mid of 2018, Amandla was dating singer/songwriter Mikaela Straus, popular known by the pseudonym that goes by the name of King Princess. However, the pair broke up in late 2018.

Around 2016, when a Tumblr user asked Amandla Stenberg about her preferred pronouns, the famed actress made her identity as a non-binary, saying she wants to be called by they/them/their.

That meant Amanda neither identified as a boy or a girl which however did not rule out the possibility of Amanda being bisexual or pansexual.

As of 2020, Amandla still identified as non-binary — people that are not exclusively masculine or feminine. However, Amandla said she wanted to go by the pronouns her/hers when it came to an official organization such as Wikipedia, or some famous magazines.

The teen Tv drama, Grand Army premiered on Netflix’s on October 16, 2020. And soon becoming the audience...