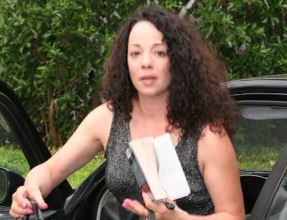 Alison Carey — Mariah Carey’s older sister — filed a lawsuit against Mariah in Feb 2021. She alleged that Mariah made “outrageous claims” in her memoir The Meaning of Mariah Carey that included a phrase “When I was 12 years old, my sister drugged me with Valium, offered me a pinky nail full of cocaine, inflicted me with third-degree burns, and tried to sell me out to a pimp.”

According to the court documents, Alison demanded “an amount no less than $1.25 million compensation for the infliction of immense emotional distress”. Furthermore, Alison took this opportunity to shed light on the childhood abuse she suffered at the hands of their mother.

Keep reading this wiki to learn more about her.

Alison Carey is the second-born of the three siblings to parents, Alfred and Patricia Carey. Her brother, Morgan Carey is 2 years older while her sister, Mariah Carey is 8 years younger than her.

More info about her family,

Brother: Morgan is an American record producer, fitness trainer, entrepreneur, and model. He lived in France and was married to Ilaria Negrini Carey.

Sister: Mariah, needs no introduction. She is a legendary R&B star who was married to Nick Cannon for almost 6 years and had two kids named Moroccan and Monroe.

Father: Alfred, full name Alfred Roy Carey Cole, passed away on July 4, 2002, at the age of 72. He was half African-American and Venezuelan-American.

Mother: Patricia (a retired opera singer & freelance vocal coach) was 60 years old when Alison alleged her of abuse in 2021. Alison’s claims included that her mother forced her to attend “terrifying middle of the night satanic worship meetings that included ritual sacrifices and sexual activity”, and had her perform sex acts on strangers when she was 10.

Alison’s parents were married in 1960 and faced a lot of racial issues and aggression liked having a gunshot fired through their window, their dogs poisoned and crosses scorched on their lawn by the Klu Klux Klan. Due to the continued rampant racial intolerance, the parent’s relationship proved insurmountable. Thus, they divorced in 1973.

Trivia: As Alfred was a black man, Patricia was “disowned” by her family for marrying him.

Alison Carey stands tall at a height of 5 feet 6 inches (167 cm) and weighs under 60 kg (132 lbs). Mentioning her distinct features, Alison has curly hair and looked identical to Mariah.

As of Feb 2021, Alison’s social media wasn’t shared. However, a few believed that she was present on Facebook @alison.carey.96995.

Alison Carey’s net worth was under $100 thousand in 2020. On the other hand, Mariah flaunted a stunning $320 million net worth then.

Rumors had that Alison was on the brink of homelessness and worked as a prostitute for a living. Unfortunately, she contracted HIV in the 1990s, a risk that came with her job.

For her treatment, Alison even asked Mariah for help once. She needed brain and spine surgery in 2016. But Mariah refused to help pay for her HIV-positive sister. For which, their brother Morgan labeled the diva “an evil witch” and called her out for being “heartless”. He shared,

“Mariah cares more about her pets than her siblings.”

In the same year 2016, Carey was even caught in a sting operation by police, working as a prostitute out of a hotel in Saugerties, Ulster County, New York.

Talking about her drug addiction, Alison claimed that her childhood trauma led her to indulge in drugs. She shared, she wanted to suppress the “horrific memories”.

Alison Carey had her first husband just at the age of 15. Yes! Alison was married to a man named Richard McDonald and within a year, she gave birth to her son Shawn.

After having her first kid, Alison dropped out of high school. She was having a hard time finding a job because of inexperience and lack of qualifications. Slowly, she turned to the streets for money.

Three years into marriage, Alison then divorced Richard in 1980.

She then dated her boyfriend Dale Scott for a while before finally marrying him in 1985. However, her second marriage didn’t work out as well and they divorced in 1989.

Alison had her second son with Dale named Michael in 1987.

It seemed like none of her children were with her. Her first child lived with his father while her second child’s temporary custody was provided to Patricia (Alison’s mother) in 1995.

Reportedly, Patricia came to pick up Michael for the weekend but decided to keep him after considering Alison’s history of illegal drug use.

Another One: Stacey Griffith Wiki: Age, Girlfriend, Net Worth, SoulCycle