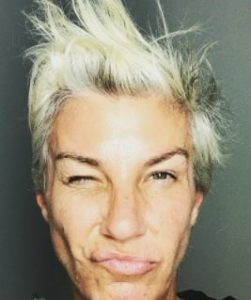 In Feb 2021, the SoulCycle instructor Stacey Griffith faced a major backlash after she posted a picture (now deleted) on Instagram of her being vaccinated. The fans were outraged as many people who were in much more need of the vaccine were still months away from being eligible for it.

However, Stacey claimed that she took no shortcut and was eligible as a “teacher”. She even apologized to her fans through another IG post sharing that she “made a terrible error in judgment”. The comments on that post were disabled, as well as on few other peripheral posts.

Here is everything we know about Stacey over this wiki.

Corresponding to her birthday, Stacey is of Aries zodiac.

Stacey Griffith was raised in her hometown Cupertino, CA. She then moved to New York City for higher education.

Talking about her family, Stacey’s dad has long passed away, while her mom celebrated her 75th birthday on Nov 1, 2019. Stacey shared that her “momma” was “spooky, funky, Halloween born” and she got more “beautiful with every passing year.” Moreover, Stacey’s mom liked to call herself “Stacey’s mom”. Even her IG account was named “Imstaceysmom”.

On Father’s day 2017, Stacey took it to her IG to share a picture of her parents. She wrote about how she missed her “poppa” every day. Over the comment section, Stacey’s mom wrote,

“Your dad loved you so much, sweetheart. He will forever be watching over you.”

Her distinct features include – whitish-blonde short hair, tattoos over her arms, and left lower abdomen.

Her posts were often work-related, inspirational quotes, and a few personal matters.

She started her career as a fitness enthusiast and shot to fame as one of SoulCycle‘s top instructors. Moreover, her star clients such as Grace Mahary, Mickey Drexler, Kelly Ripa, Demi Lovato, Brooke Shields, and Oprah Winfrey, certainly helped her climbed the ladder.

According to Stacey’s Linkedin profile, she joined SoulCycle in Oct 2006 as a founding instructor and has worked there for over 14 years. On average she taught over 800 classes per year, 18 classes per week.

However, SoulCycle’s page claimed that she “has been delivering sold-out indoor cycling classes” since 1996.

Riding on her success, Stacey even penned a fitness inspiration book called Two Turns From Zero — “a book that tales her 30 years in the fitness industry by teaching the reader how to convert your physical goals into a life strength that will make you unstoppable.”

Just in case you are curious, a typical SoulCycle Instructor salary was around $80 thousand per year.

Did you know: Stacey once struggled with drug addiction. She was drinking, taking cocaine, ecstasy, and crystal meth. But then, fitness pulled her out of her addiction. As her popularity grew, she got busy with classes and “felt accountable” to her students.

As of 2021, Stacey Griffith was dating the famed fashion designer, Michelle Smith.

Michelle — who split from her husband/ Milly co-founder Andrew Oshrin in 2017 — shared that her relationship with Stacey was surprising. In her words,

“Not anything I expected … Just it happened.”

Also, Stacey was the first girl Michelle ever dated. Though Michelle’s family were surprised at first because she led a “heterosexual life” for over 50 years, they later were “very accepting”. Now, Michelle identifies herself as “pansexual”.

Stacey and Michelle first introduced themselves as girlfriends in October 2019. They came to light only after a year of gossips circling in the fitness and fashion world.

Before Michelle, Stacey was in a long-term relationship with the photographer Debby Hymowitz. Though the duo was together for almost 12 years, Stacey never asked Debby to be her wife.

Debby was already a mom with three beautiful daughters – Lilli Eve Hymowitz, Cloe Sofia, and Jenna before she met Stacey.

Reportedly, Stacey and Debby broke up in June 2018.

As for her sexuality, Stacey could identify herself as a lesbian.