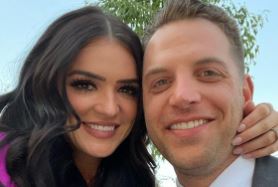 Finally, after four years of dating, and three postponed weddings, the Bachelor in Paradise stars, Raven Gates and Adam Gottschalk tied the knot on April 16, 2021.

So while we already know enough about the bride, let us take a time out to also learn about the newly wedded groom over this Adam Gottschalk Wikipedia.

As per his birthday, Adam is of the Leo zodiac.

Some facts about him: Adam’s favorite movies were Transformers, The Pursuit of Happiness, and The Wolf of Wall Street. His favorite actor was Jennifer Lawrence, and if there is one thing Adam was scared of it was “snakes and spiders.”

The athleticism ran in the Gottschalk family. The sons of Bill and Patricia — Adam, Will, and Ben, were all football players.

His brother, William Gottschalk was living in their hometown Los Angeles, California in 2021, and worked as a software engineer at Snap Inc. then. Before that, he has worked for companies like ChawNow, Originate, and 3D Slides. For education, William attended Rensselaer Polytechnic Institute for bachelors (2006 – 2011) and Harvard University Extension School for masters (2015 -2018).

As for Adam’s brother Ben Gottschalk, who made it to the NFL as an offensive lineman, he went on to co-found Boxer Dynamic — an innovative medical record-keeping company. Also, he was the founder of Gottschalk Offensive Line Development. For education, he attended Southern Methodist University in sports and fitness administration from 2010 to 2014.

The three Gottschalk siblings were close to each other and often went on family trips together. 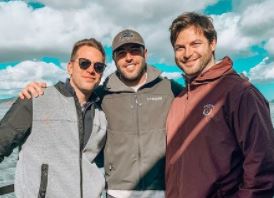 Adam Gottschalk with his brothers Will and Ben (Source: Instagram)

Mentioning his distinct features, Adam has unique brown eyes, a beautiful smile, and had no tattoos over his body.

Most of his posts featured his family, and of course his wife, Raven Gates.

Adam Gottschalk is a real estate investor. In 2021, he was working as the vice president at his self-proclaimed “Multi Billion-dollar-producing” real estate company called STRIVE.  Reportedly, he was the partner of the company since Jan 2021.

Before STRIVE, Adam took on a job as a commercial agent at Marcus and Millichap for over 2 years. Also, he worked as the operation/ events coordinator for The Milken Institute and also the University of Arizona Football for another 2 years.

Before all it started, Adam co-owned an event management company called A Square Entertainment, LLC.

In light of his education, Adam went to the University of Arizona and completed his bachelor’s in “regional development, entrepreneurship, and business management” in 2012. During his time there, Adam played as the safety for the college football team.

But the wasn’t the first time he played for a school team. Before that, he played for winning 2005-06 CIF Division X championships under coach Jeremiah Ross at Crespi Carmelite High School.

Now, that Adam was all successful, he committed to a gift of $25,000, that will go toward the completion of UA’s new Indoor Practice Center, a key strategic initiative for Arizona Athletics. He shared that the “gift” was personal as his scholarship helped him out a lot when he was a student.

To honor him, he was labeled as an “inspiring example of what young UA alumni can accomplish” by their college page.

Trivia: In Dec 2020, Adam represented Raven to her first commercial property, and also took it to his IG to share the news, praising her for her saving habits.

Adam Gottschalk first met his future wife Raven Gates back in 2017 at the set of Bachelor in Paradise, and they fell for each other fast.

Dating for 2 years, Adam then bent his knee in 2019. The duo then planned to get married within a year, however, because of the global pandemic, they had to postpone their wedding three times!

Finally, on April 16, 2021, they got married at The Olana in Dallas, which was attended by just under 20 family members. The newlyweds were looking forward to starting a family. The lovebirds also shared a cute black german shepherd, which appeared over their IG often.

On 25th July 2021, Adam and Raven revealed they’re expecting their first bundle of joy. The latter even referred to the pregnancy as a “honeymoon baby”. For his part, Adam took to IG and shared, “Beyond excited to announce our baby into this world. Your Mom has already started to like Daddy’s food groups and I think that’s a great start. Cheers to fatherhood [cheers and smiley emojis]. Coming soon… January 2022.”