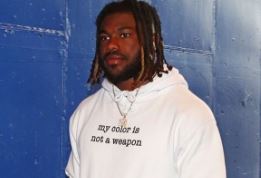 Zack Moss joined Buffalo Bills as the “rookie running back” in early 2020. His career game against the Patriots intrigued the “NFL Research” after totaling “81 rushing yards and two rushing touchdowns.” They praised  Zack stating that there were only three other rookies before him, who accomplished his feat.

So, Zack might just be the next big name in the NFL and people were already wondering if he was associated with other NFL pros like Santana and Randy Moss. Also, what about his parents? Did Zack had a wife or a girlfriend?

Stay with us till the end to find answers to all your questions.

Corresponding to his birthday, Zack is of the Sagittarius zodiac.

Born to parents Anthony and Cassandra, Zack Moss grew up in a big family. He shared that his parents and siblings were his no.1 fans and they often came to witness his games.

Zack’s siblings, though they might not be as popular as him, they seemed to be in a minor spotlight as well. His 2 years younger sister, Tyra Moss was an aspiring model and entertained 7.3K followers over her Instagram.

Also, his brother, Colby “Bean” Moss played for Georgetown Football. He was a two-year captain at Miami Springs Senior and played Defensive Back at Doral Academy Charter School.

However, Zack’s other brother, Tywonn Moss pursued a medical career. He an MBA graduate and worked in the healthcare sector.

But apart from Tywonn, even Zack’s cousins were out in the field. Cousin, Santana Moss (18-year older) was in the NFL for 14 seasons and cousin, Sinorice, for six seasons.

Coming to the question, if Zack was related to Randy Moss – “No” he is not.

His distinct features would be his bulky beard and those blond striped dreadlocks.

According to Zack, his life changed “dramatically” after being selected by the Buffalo Bills in the NFL Draft. He shared,

“More text messages, more phone calls, more this and this. Besides that, not much change, I’m still the same person, you know – video games, staying home with my girlfriend. So, nothing crazy, it’s all still the same.”

Before his time on the Buffalo Bills,  Zack already piled up “4,067 rushing yards, 38 rushing touchdowns, and 66 receptions”  over his four-year career. He was even honored with the title  “Pac-12 Offensive Player of the Year” and a few All-American honors.

In light of his education, Zack attended Miami’s Hallandale High School and the University Of Utah.

His football fame garnered him over 42.8K followers over Instagram and 18.7K followers on Twitter, as of 2020.

During the 2020 pandemic, Zack Moss was cooped up with his girlfriend, Jesse Santos. The duo started dating back in 2018 and celebrated their 2nd anniversary on October 18, 2020. To commemorate, Zack took it to his Instagram to write,

“2 years down & forever to go with my luvvvvvvvvv.”

Also, the lovebirds often appeared over Instagram in each other arms or sharing a kiss, with “lovey-dovey” captions. Furthermore, Zack wasn’t afraid to show that he was head over heels for Jesse and she reciprocated the love right back at him.

In an interview Zack shared,

“If we didn’t have the team that we’re going to have this upcoming season, I probably would have taken a different route. But all of those things lining up, I just felt like I could do without the money right now. I didn’t want to have any regrets at the end of the day about not finishing up here and leaving things on the table.”

It looked like Zack was all set to get engaged and make Jesse his wife.

A little info about Zack’s girlfriend, Jesse Santos: She was also in the SENIORS  2k15 women’s football team and shared a passion for the sport. Also, she was a lot shorter than Zack and a spine tattoo written “Vulnerability & Strength”.