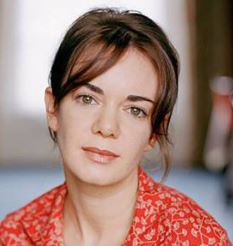 Victoria Hamilton once joked that she hadn’t been out of corset for the past seven years. So frequently did she appeared in the period dramas and so strong was her image as the specialist of the genre.

Read the beloved actress’s bio below, including the information regarding her married life, kids, net worth.

Victoria Hamilton was born on 5 April 1971 in Wimbledon district of London. Victoria turned 48 on 5th April 2019. Her family wasn’t a theatre household. However, in spite of that, she was very much interested in acting.

She first started her education to study English at Bristol University but later chose to train for the theatre at the London Academy of Music and Dramatic Arts.

Victoria started her career with theatre troupes like the Royal Shakespeare Company and the National Theatre. Her first major performance was in Henrik Ibsen’s The Master Builder, for which she was showered with praises and critical acclaim.

Throughout her career, Victoria won numerous awards including Critics’ Circle Theatre Award, one of the most prestigious theatre awards in the UK and a nomination for the Tony Award.

Victoria Hamilton was also a famous name in the movies and the TV shows, with her back to back performance in the period piece dramas (also called costume dramas). Her most famous works were the trio of Jane Austen adaptations: Persuasion, Mansfield Park (movies) and Pride and Prejudice (TV Show).

She stands at the moderate height of just a tad over 5 ft 3 inches.

Victoria Hamilton’s husband is also a fellow actor named Mark Bazeley, who is famous for TV shows like Cobra, Broadchurch, Home Fires, etc. and movies like The Bourne Ultimatum, The Queen, etc. Victoria and her husband got married on 22 January 2008.

Adding to their happy married life, two kids were born soon after their marriage. The eldest son, Tam, was born in 2009 and younger son, Hal, in 2011.